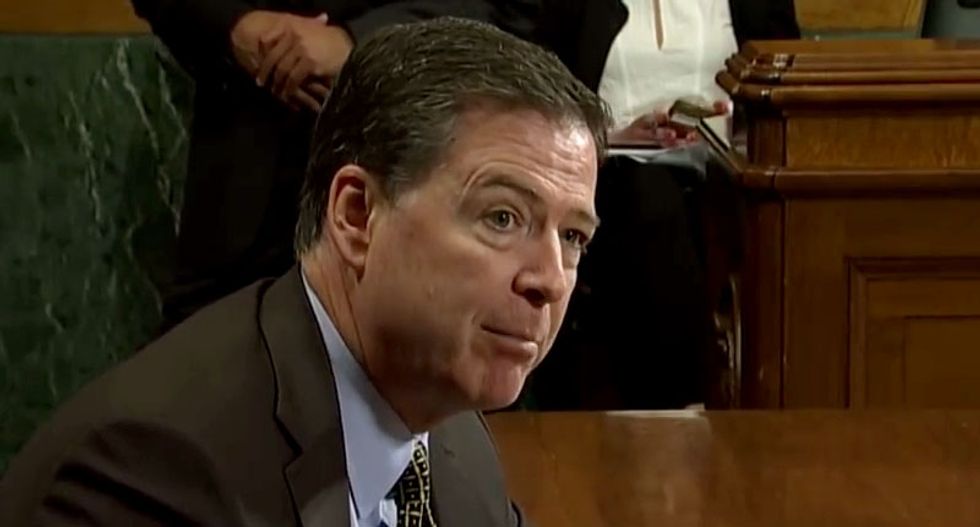 Such allegations might be used as the basis for impeachment proceedings, some of the analysts said. Any such step would face a steep hurdle, however, as it would require approval by the U.S. House of Representatives, which is controlled by Trump's fellow Republicans.

According to written testimony posted on the Senate Intelligence Committee's website on Wednesday, Comey said Trump told him during a one-on-one Feb. 14 conversation that former national security adviser Michael Flynn was a "good guy" and hoped that Comey could see his "way clear" to letting go a probe into ties between Flynn and Russia.

Trump had fired Flynn the previous day in a controversy over contacts between the retired general and the Russian ambassador to the United States.

Comey's account, released ahead of his appearance before the committee on Thursday, could show that Trump intended to impede the Flynn investigation, said Michael Gerhardt, a professor of constitutional law at the University of North Carolina School of Law.

"The express discussion of loyalty is disconcerting,” and could heighten speculation that the "president was trying to exert some pressure or at least exert some influence over the Russia investigation,” Gerhardt said.

Comey, who was fired by Trump on May 9, was leading an FBI investigation of Flynn as it looks into allegations of links between Russia and Trump's 2016 presidential campaign. Moscow and Trump have both denied any collusion.

Trump's lawyer, Marc Kasowitz, did not immediately respond to a Reuters query about whether Comey's testimony would support an obstruction case. But he said in a statement that Trump felt "vindicated" by Comey's confirmation he was not under investigation in any Russia probe.

To build a criminal obstruction of justice case, federal law requires prosecutors to show that a person acted with "corrupt" intent. It does not matter whether the person succeeds in impeding an investigation.

While a sitting president is unlikely to face criminal prosecution, obstruction of justice could form the basis for impeachment.

Bruce Green, a professor at Fordham University School of Law, said it would be difficult to show Trump intended to impede the Flynn investigation. He said Trump could say he was merely vouching for Flynn's character and voicing concerns about how the probe was interfering with his ability to function as president.

Alan Dershowitz, a professor emeritus at Harvard Law School and well-known defense lawyer, added that Trump's comments to Comey were "ambiguous statements" and "not even close to obstruction of justice."

Other legal experts said, however, that details surrounding the Feb. 14 conversation could indicate that Trump intended to interfere with the Flynn probe.

According to Comey, Trump told his close advisers, including Attorney General Jeff Sessions and Jared Kushner, to leave the room so he could speak to Comey privately.

“Asking others to leave the room could suggest the president was aware that there was something wrong with what he was doing,” said Andrew Wright, a professor of constitutional law at Savannah Law School.

Wright said there were other damaging details in Comey's testimony, including that Comey did not document his conversations with former President Barack Obama but "felt compelled" to do so after his first conversation with Trump.

Gerhardt agreed the testimony was a blow to Trump, saying: “Some people who weren’t concerned before should be concerned now."