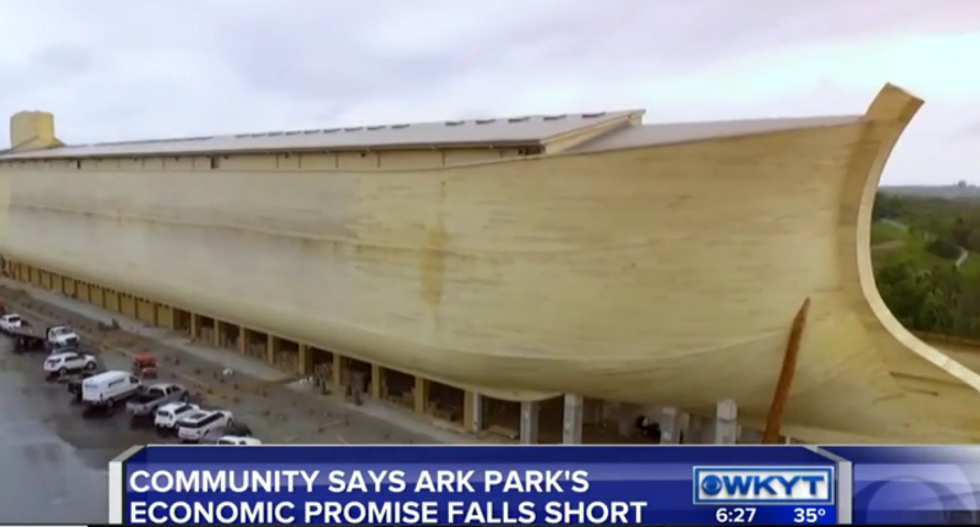 The organization behind a tax-payer subsidized "replica" of Noah's Ark in Kentucky is blaming atheists for tax-payers getting fleeced by the project.

Creationist Ken Ham built the $92 million Ark Encounter project in Williamstown, Kentucky. The "dismal failure" of the project has backers lashing out at "intolerant atheists" for mocking the return on investment taxpayers have received.

"Sadly, they are influencing business investors and others in such a negative way that they may prevent Grant County, Kentucky, from achieving the economic recovery that its officials and residents have been seeking," complained Ken Ham, president of Answers in Genesis.

"Why so many lies and misinformation? Simply because we are in a spiritual battle, and the intolerant secularists are so upset with such world-class attraction like the Ark (and Creation Museum) that publicly proclaim a Christian message," Ham claimed. "They will resort to whatever tactics they deem necessary to try to malign the attractions."

Not just atheists, Ham also blamed the media for not uncritically repeating his alternative facts.

"Nowadays, it seems very few reporters in the secular media actually want to report facts regarding what they cover as news," Ham said. "I’ve found that not only do these kinds of reporters generally do very poor or lazy research, they will actually make things up for their agenda purposes."

"The 'fake news' angle used by Ham doesn’t exactly hold water. As Patheos notes, while one recent article did err on two small points related to the Ark Encounter, local business owners haven’t challenged accounts that their profit margins haven’t been raised by Ham’s project," Alternet reported. "Estimates for the park’s annual draw were between 1.4 and 2.2 million visitors annually. Now approaching the one-year anniversary of its grand opening, park co-founder Mike Zovath said visitor tallies will hit 1 million as of July. But that figure can’t be confirmed by outside sources."

Despite Ham's claims, local leaders are adamant that the taxpayer subsidies are not trickling down to the taxpayers.

"I think the Ark's done well [laughter] and I'm glad for them on that," Grant County Judge Executive Steve Wood told WKYT. "But it's not done us good at all."

Alternet linked to Daily Kos analysis of the publication Church & State noting Ark Encounter received, "$18 million in state tax incentives to offset the cost of the park's construction; a 75 percent property tax break over 30 years from the City of Williamstown (a town of about 3,000 near where the park will be located); an $11-million road upgrade in a rural area that would almost exclusively facilitate traffic going to and from the park; a $200,000 gift from the Grant County Industrial Development Authority to make sure the project stays in that county; 100 acres of reduced-price land and, finally $62 million municipal bond issue from Williamstown that Ham claims has kept the project from sinking.”

Watch WKYT News on the project: