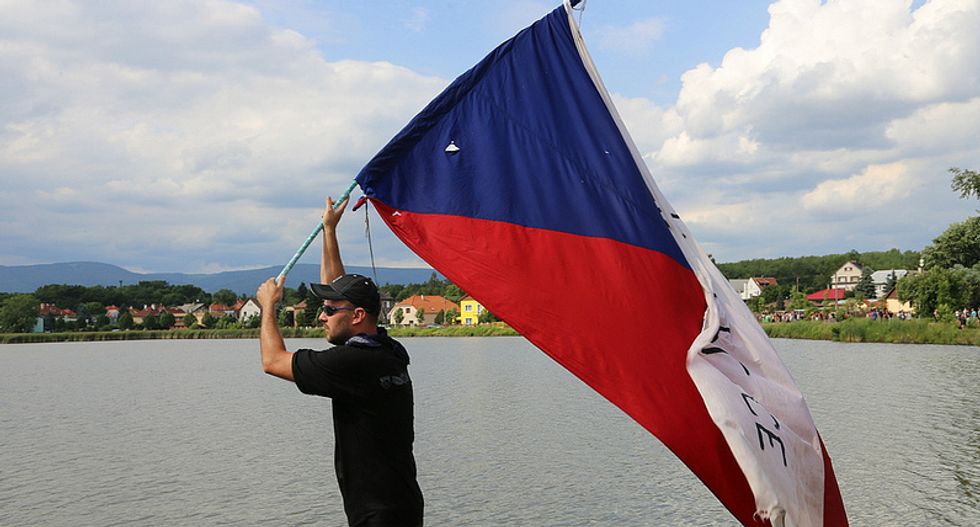 A man holding a Neo-Nazi flag at a rally in Duchov, Czech Republic (via Daniela Kantorova/Creative Commons.)

A new Daily Beast report reveals that members of a European alt-right group aim to "defend Europe" by chasing down boats full of Libyan refugees off the coast of Italy.

After successfully raising more than 50,000 pounds for boats and equipment, the "Defend Europe" project led by a group who call themselves "Identitarians" wrote that they are on "a mission to rescue Europe by defending the Mediterranean Sea by stopping illegal immigration."

The "illegal immigrants" they claim to be stopping are, according to the Beast, "the thousands of migrants and refugees who arrive in Italy from Libya every week." Their methods include attacking humanitarian ships and they have claimed they will "protect Europe’s borders at sea at any cost."

Although most of the Libyans who make the dangerous journey to Italy via the Mediterannean do not do so legally, many humanitarian groups aim to help them -- and according to the Beast, those groups are also the targets of Identitarian ire.

"When the governments fail, we step in because this land is ours," the Identitarians said in a video describing their "Defend Europe" mission. "It starts and has to end here."

The Beast report also suggests the "tiny" boat of fringe activists might have been gained access to the SOS Méditerrenée due to either overt or implied help by Sicilian prosecutor Carmelo Zuccaro, an official well-known for his stance against immigrants and the nongovernmental organizations that aid them.

The Identitarian movement began in France in the early 2000s, but has "spread through Europe’s wealthier nations where anti-immigration sentiments are strongest." They are reportedly close with the American alt-right -- so much so that they often fly the same flag bearing the Greek lambda.

Watch video of the attack on the SOS Méditerrenée below.