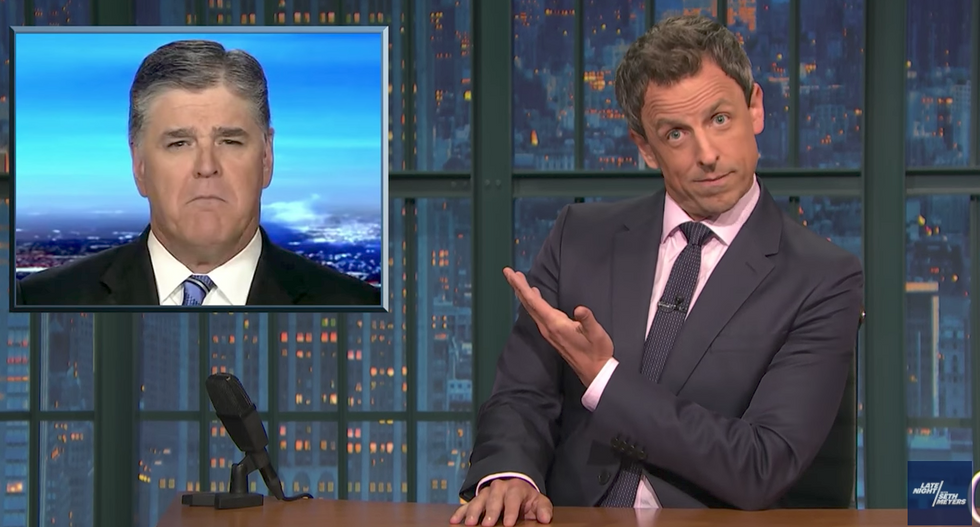 Seth Meyers on Wednesday hit Fox News for its’ incessant championing of Donald Trump, joking the morning show “Fox & Friends” has “showered Trump with so much praise they’re starting to sound like the helicopter parents of a sh*t private school kid.”

“Our Donny would never collude with Russia how dare you?” Meyers joked. “Do you even know how much money we give to this school?”

Meyers then turned to Trump booster Sean Hannity, “whose surgery to have those bolts removed from his neck was apparently successful, so, congrats, bud.”

“But even when they try to protect Trump. His friends at Fox do more harm than good,” Meyers said, pointing to when Hannity listed off “some of the most embarrassing rumors” about the president, including “the dossier that talked about Trump, at a Ritz-Carlton, in Moscow, with two prostitutes urinating on his bed.”

“Well we do now,” Meyers joked. “You are a terrible wingman.”

Meyers later scorched Trump over the fake “TIME” magazine covers that hang in several of the president’s real estate properties.