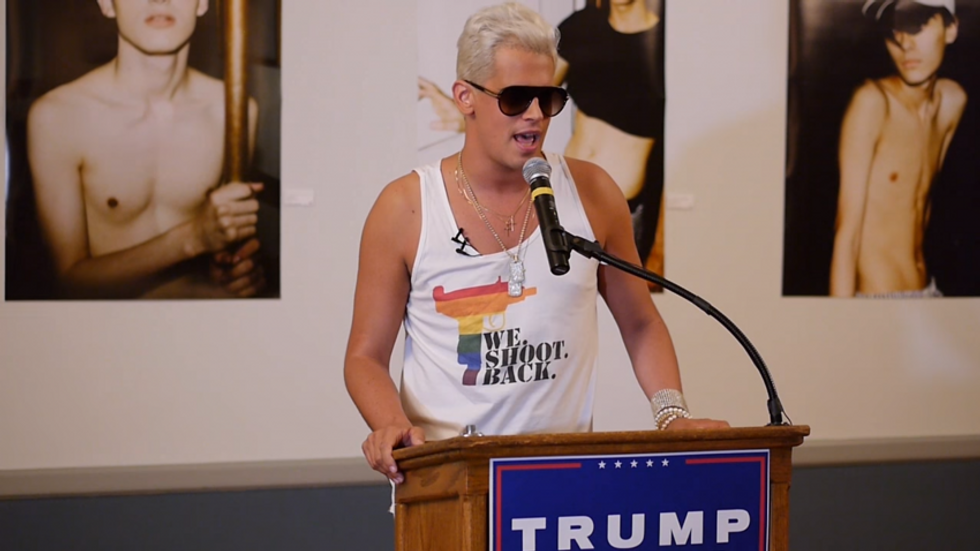 For a long time, gay men were not welcome in American white nationalist organizations such as the Ku Klux Klan -- but a new generation of racist activists is trying to be more inclusive.

White nationalist organizations such as Richard Spencer's National Policy Institute, Counter-Currents Publishing, and American Renaissance have been actively recruiting gay men to their cause by pushing fears of the threats that Muslim immigrants pose to the LGBT community.

Two of the most prominent gay Nazis are named Jack Donovan and James O'Meara -- and they employ sharply different tactics for recruiting other gay men into their movements.

Donovan relies on creating an idealized vision of gay masculinity, while at the same time slamming traditional gay culture for "effeminacy," feminism, and "weakness." Donovan is also known for preaching the value of violence as "the primary value of those who create order, who create worlds."

O'Meara, meanwhile, is more willing to embrace elements of mainstream gay culture, as Slate notes that he "writes alternately smirking and playful essays for Counter-Currents about men's clothing, the closeted Cardinal Spellman, the 'homoromanticism' of the Boy Scouts, and the political economy of The Gilmore Girls."

However, O'Meara is every bit as racist as Donovan -- his other writings promote, among other things, that Jewish moguls use their control of Hollywood to excessively promote heterosexuality among black men to ensure they have too many unwed children, thus keeping them economically impoverished.

"The blacks get their chicks pregnant as soon as they turn 15, and have 30 different children with 10 different women," he has written.

The entire essay on the rise of gay men in the Nazi movement can be found here.