Karen Handel tells mom of lesbian: 'My faith calls me' to stop your daughter from adopting a child 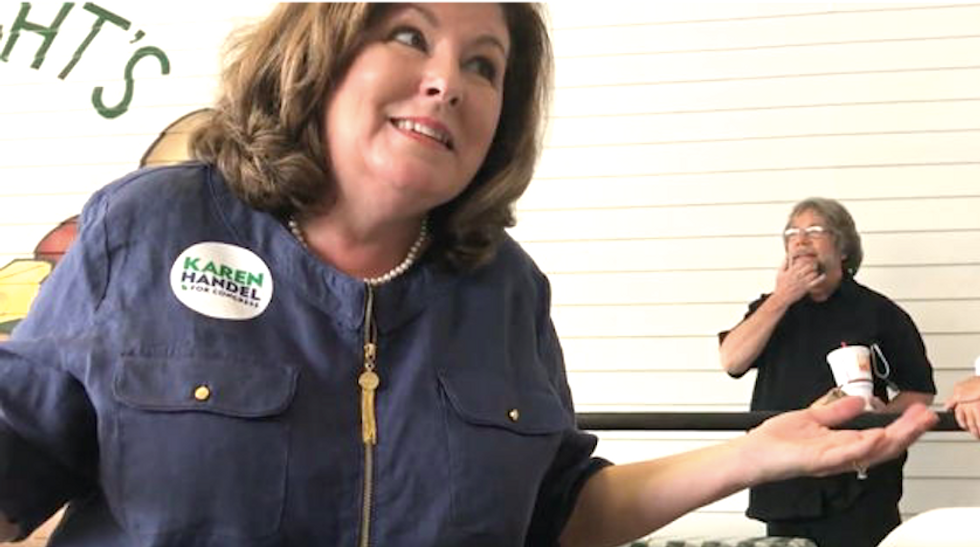 Karen Handel -- the Republican candidate in next week's special election in Georgia's 6th Congressional district -- told a constituent with a lesbian daughter that her "faith calls her" to prevent the woman's daughter from ever adopting a child.

The New Civil Rights Movement reported Friday that Handel was clearly caught off guard by the woman's question, which took place during a constituent meet-and-greet at a sandwich shop in the district.

In video taken from the event, the unnamed constituent explained to Handel that she is a conservative, but has a lesbian daughter.

"What protections do I have for her having a family in the future, wanting to adopt a kid?" the woman asked.

"(N)ote how quick Handel is to cut the woman off when the conversation moves to civil rights and equality for LGBTQ people," wrote NCRM's David Badash.

“I have to be honest," Handel told the woman while placing her hand on her heart. "My faith calls me to a different place on the issue.”

She went on to say that her faith calls on her to be "compassionate," but that she is "not aware of anything in the law, right now, that I'm aware of, that's going to be impactful, from a discriminatory standpoint, against your daughter."

She then stood, giving an arms-wide, "What am I supposed to do?" gesture and ended the conversation.

When Handel ran for governor in 2009, she tacitly pledged to outlaw adoption by same-sex couples in Georgia.

"I am against gay adoption. But remember — I mean, if there is legislation on that, certainly I will follow that and look at it. But in the end, ultimately courts are going to be the ones to have to make the decision on that and it’s always in the best interests of the child. Do I think that gay parents is in the best interest of the child? No. But we do have our court system that deals with many and most of those issues," she said at a campaign stop.

"Would you consider outlawing adoption by same-sex couples?" she was asked.

"Yeah, I would consider that, absolutely," she replied. "I think that for a child to be in a household -- in a family in a household with a situation where the parents are not married, as in one man and one woman, is not the best household for a child."

Watch video of the interaction, embedded below: