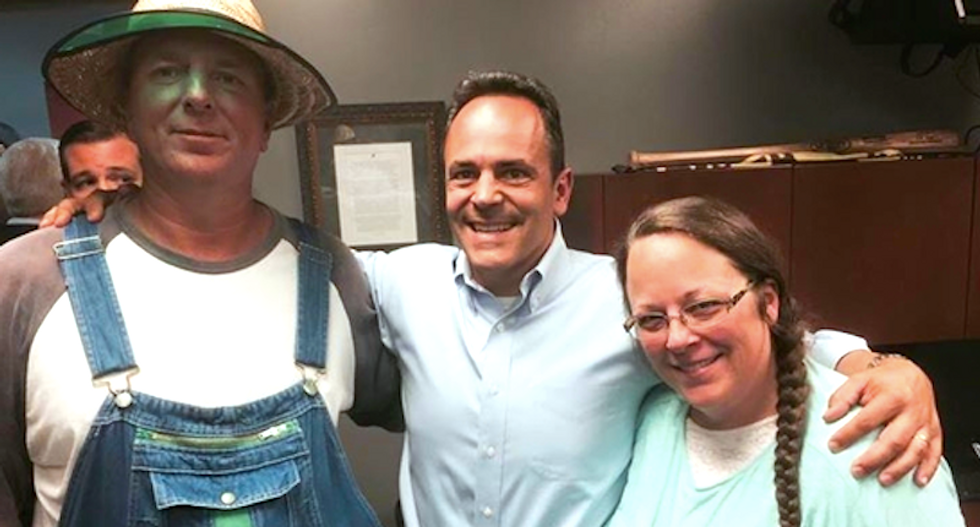 Over the past few weeks, a conflict has unfolded in Kentucky, revealing a split in American Christian conceptions of the individual and the individual’s role in society. Kentucky’s evangelical governor Matt Bevin recently proposed to eradicate violence in Louisville’s poorer, largely African-American west side by calling for faithful Christians to volunteer and assemble in “small groups of three to 10 people to begin a ritual of quietly walking one block, in one troubled neighborhood, at 7 p.m., several days a week for one year, praying as they walk.” The governor admitted the plan was “Pretty unsophisticated. Pretty uncomplicated. Pretty basic,” but he insisted—“I truly believe… I personally believe”—that such ritual prayer has the power to change material reality. “I’ve seen it,” he testified.

Met with praise—including fervent prayer and shouts of “amen”—at its church-service-like unveiling, the plan has also been the target of criticism, particularly by Christian leaders within the West Louisville community. The debate that resulted pitted Christian claims about the miraculous power of prayer and the separation of Christian community from history and political structures against contrasting Christian claims that emphasize social and political intervention and the responsibility of the state to act in accord with Christian ethics. The drama reveals competing currents within American Christianity, “religious” currents coinciding with economic ones—with race as a major factor in which Christian/economic worldview was most compelling for an individual.

Black church leaders were quick to speak out against the governor’s plan not because they dismissed the power of prayer, but because prayer seemed simultaneously insufficient and inappropriate as a government response. Reverend Clay Calloway of the West Louisville Ministers Coalition for Economic Justice, for instance, told reporters he wished he had been given “a barf bag” in advance of the proposal’s unveiling, arguing that the governor “has a responsibility to produce public policy, regulation and provide resources. We don’t need a sermon or him quoting Scripture, we know the Bible and we’re already praying.” Calloway’s emphasis on the need for the government’s this-worldly power to intervene in what he insists are the likewise this-worldly conditions that facilitate violent crime is echoed by other local Christian leaders.

Reverend Kevin Cosby of St. Stephen Baptist Church, has floated his own practical policy proposals, including restrictions on gun sales, reintegration of former felons, and educational campaigns about “past and present racism,” suggestions all linked to the belief that today’s street violence results not merely from the free will of the individual, but is also inexorably shaped by deep historical patterns and social structures. “The fact of the matter is there is violence in the community because there is poverty, and the poverty is rooted in systemic injustice and racism that has plagued this country since 1619,” he said. “To talk about the present situation without talking about the historic and social antecedents that gave birth to it is disingenuous, is dishonest… it’s cowardly and it’s political.”

Reverend Joe Phelps of Highland Baptist Church has expressed his embarrassment over the governor’s limited “understanding of the Christian faith” as well as his limited “capacity to govern.” Phelps emphasizes that “West Louisville needs the help that a governor can uniquely provide. Governors hold enormous power. Their hands rest on levers that could combat directly and profoundly the root cause of violence: poverty.” Phelps argues that coinciding with the color-coded areas of the Louisville maps Bevin displayed at his meeting are African-American neighborhoods devastated by decades of national, state, and local policies favoring white communities and leaving black West Louisville to fend for itself. Jim Crow laws. The G.I. Bill. Bank redlining. Social security. All designed for whites to prosper—but not blacks. Systemic, governmental racism. Christians can acknowledge these sins and, like Luke’s story of Zacheus the tax collector, make financial reparations.

“With few or no resources,” Phelps insists, the poverty of West Louisville increased and, along with it, violence, for “Violence is the child of poverty” and “Poverty is the child of systemic oppression.”

Yet that statement is, in many Christian communities, seen as a faith claim—and in Bevin’s version of Christianity it is a claim of bad faith. The conflict over Bevin’s prayer initiative is a conflict between neoliberal, libertarian strands of American evangelicalism, where privilege is accorded to the individual— gifted with free will, deciding his or her own fate—and an American social gospel tradition heavily flavored by the Enlightenment rationality of the Founders, with attention to structures of power as both historically damaging and burdened by responsibilities, in the present, for the common good. Thus, Reverend Calloway can argue that “you need the correct regulations and provide resources to remedy the age-old problems that created the violence in the first place” while the governor can counter—in an equally utilitarian vein—with a personal insistence on the immediate and transformative power of ritual prayer. Both men express a motivation, rooted in their respective understandings of Christian tradition, to fix the problem of violence. They are opposed, however, in terms of their understanding of the problem, which comes down to their conception of the individual and their relation to society. Does violence result merely from individuals making their own bad choices, or is violence also a product of long-standing systems of discrimination and inequality?

Bevin, who said that those who oppose his prayer initiative “hate God” and suggested that his critics in the clergy would be bound, on Judgment Day, for damnation, rejects any way of seeing the world in which the individual is not an agent of free choice—a conception of the Christian soul that fits with the wider American notion of the citizen as consumer, as Sean McCloud has detailed in his fascinating American Possessions.

Bevin’s views are shaped by and shape a particular social position—bluntly, he can believe what he believes more easily because he’s a wealthy white male. If the drama over the prayer proposal reveals major divides within American Christianity, calling attention to the way religious worldviews shape and are shaped by broader fields of politics and economics, and to how religion is always the product of specific histories and enmeshed in specific contexts, it also serves to remind us of the myriad roles that race and racist oppression have played and continue to play in American history. And here I mean not just what Bevin’s clergy critics have pointed to, in terms of a lineage of inequality. I mean, too, that black Christianity has, in large part, been unable to coexist with the variety of faith Bevin relies upon, one that puts stock in the miraculous alone, existing in a vacuum with regard to history and practical, material concerns.

Bevin lives in a laissez-faire free-market world; the ministers speaking out against his plan know that West Louisville is not an economic blank slate, that entrepreneurial spirit is not enough to break out of patterns of poverty in that area.

Reverend Cosby voices a critical Christianity, a Christianity always aware of the historical sins to which it lent a name and a justification.  It is through this resolutely historically-conscious religious lens that he expresses his rejection of the governor’s plan as insufficient, even insulting: just as Christ was used to justify slavery and Jim Crow, the governor put Christ on the side against government intervention. This is one of the reasons why many thinking black people are turned off by Christianity and call it a “white man’s religion” or “whitetianity.”

That the governor’s response to such racially-attuned critique was to suggest damnation for his critics speaks not merely of his own blustery, stumbling rhetoric (he famously floated the possibility of bloodshed to preserve America should Clinton have won the presidential election) but also to the blindness inherent in the faith in which he believes.

While critics outside of religious circles have ridiculed Bevin’s reliance on ritual magic, it isn’t prayer that’s at the root of the governor’s prayer initiative—rather, it’s unwavering faith in the individual and the free market.

Americans are dining out in record numbers as pandemic restrictions lift, with restaurants struggling to keep up with demand amid a labor shortage, data released by review site Yelp showed Tuesday.