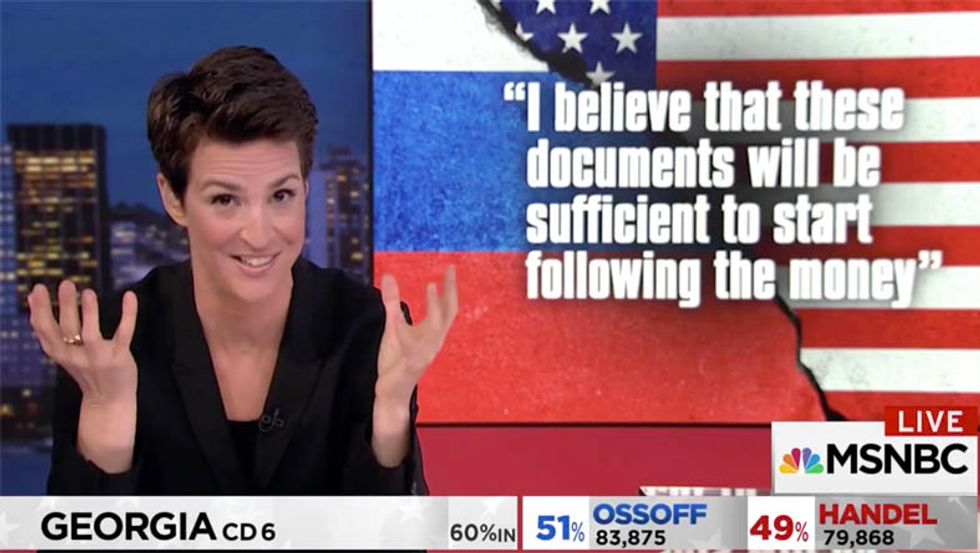 On Tuesday night while the country was transfixed by the special election in Georgia's 6th district, Rachel Maddow took a look at an upcoming report by Tim O’Brien of Bloomberg News, that may provide a road-map between financing of Donald Trump's real estate deals and "money connected to Russian President Vladimir Putin."

In typical Maddow style, the MSNBC host walked viewers through tabloid headlines about arrests of Mafia members and the "Borscht Boys," connecting them to former Trump business associate Felix Sater.

Maddow notes that investigators hope to unseal documents related to a federal case involving Sater that might show that Trump engaged in financial fraud prior to becoming president. According to the MSNBC host, Sater has a history of being a valuable informant, as testified to by former Attorney General Loretta Lynch when she was a prosecutor and oversaw his case.

Armed with a copy of the Bloomberg report -- due to be released Wednesday morning -- Maddow revealed that the financial packages created by Sater show a direct link to several Trump real estate projects and an investment firm close to Putin.

“We’re left with the question — Why’d that happen?" Maddow asked in summation. "Why was money connected to Putin pouring into Trump projects? Why did they do that?”