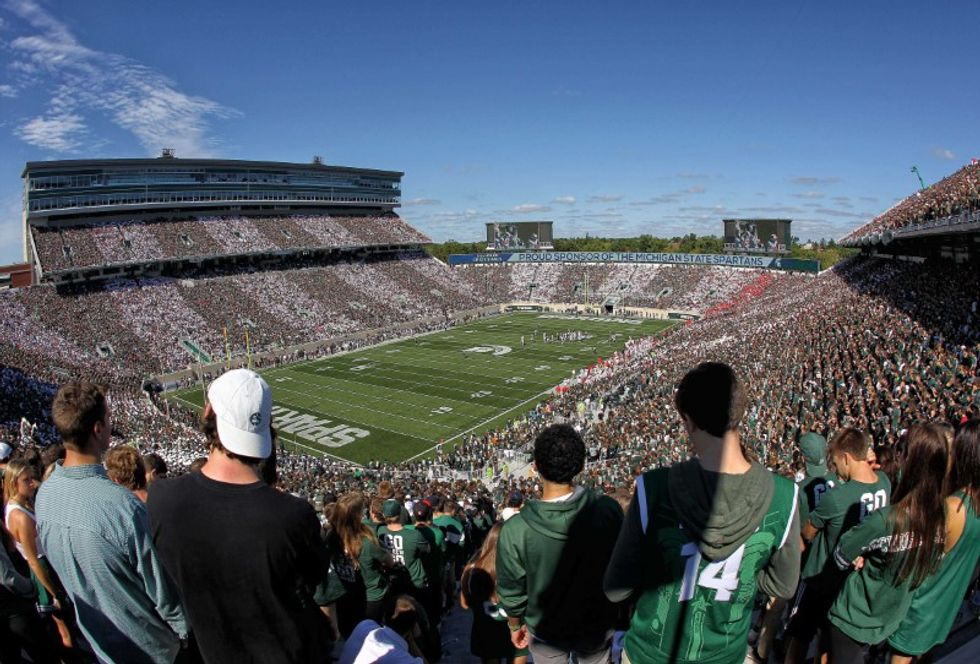 Sep 24, 2016; East Lansing, MI, USA; General view of Spartan Stadium during the first half of a game between the Michigan State Spartans and the Wisconsin Badgers. Mandatory Credit: Mike Carter-USA TODAY Sports

Three Michigan State University football players were charged on Tuesday with sexual assault in the latest incident in a mushrooming problem on U.S. college campuses.

MSU players Donnie Corley Jr., Demetric Vance and Joshua King are accused of sexually assaulting a woman at a party in an on-campus apartment in January, according to campus police. The woman has not been identified.

Corley says he is innocent, his attorney, John Shea, said in an emailed statement. Attorneys for the other two players could not be reached.

The three men were dismissed from the Michigan State football program on Tuesday.

"Sexual assault has no place in our community, and I want to share my deep concern for the young woman affected and her family," MSU football coach Mark Dantonio said in a statement after the men were charged.

The woman said King pulled her into a bathroom and forced her into sex acts, while the other men came in and forced her to perform oral sex, Michigan State University police detective Chad Davis said in Lansing district court on Tuesday, the Detroit Free Press reported.

A video of King having sex with the woman in the bathroom was found on his phone, Davis said.

Karen Truszkowski, an attorney for the woman, told reporters the case reflected a larger problem.

"Look how many arrests we have had for sexual assaults with football players, and these are not the only incidents. There are a whole lot more out there," she said on Tuesday, according to video posted by the Detroit News.

An investigation by a law firm into the university's handling of the case, which was released on Monday, found the coach had acted promptly. But a football team staff member violated school policy due to contact he had with the accused players, it found. The university did not renew the staffer's contract, the Free Press reported.

Last month, a former Baylor University student sued the Texas college, alleging she was drugged and gang raped by football players and that the school had turned a blind eye to sexual assaults by athletes on campus.

In 2016, the case of former Stanford University swimmer Brock Turner who was convicted of sexually assaulting an unconscious woman stoked a national debate about campus sexual assault. He was sentenced to six months confinement in a California county jail but was released after three months.

Nearly one in five U.S. women have been victims of sexual assault, according to the U.S. Centers for Disease Control and Prevention.

(Reporting by Chris Kenning in Chicago; Editing by Jeffrey Benkoe)