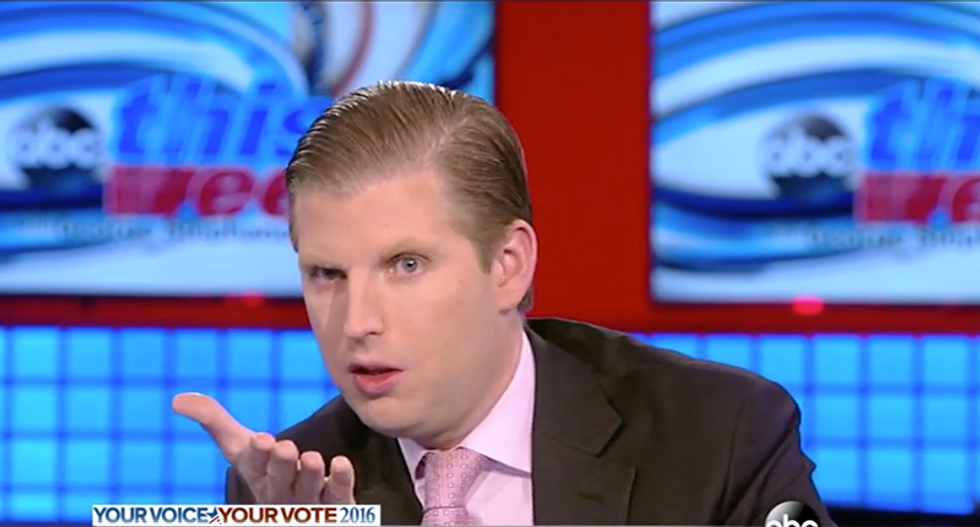 The New York Attorney General's office announced on Friday that it is "looking into" the Eric Trump Foundation -- a children's cancer fund -- for what appears to be an "indirect act of self-dealing."

Forbes.com reported that after months of investigating the Donald Trump Foundation, AG Eric Schneidermann's office will now focus on President Trump's son Eric after report's surfaced this week that the cancer fund had diverted donations to Trump family businesses.

“The Attorney General's office is looking into the issues raised by this report," said communications director Eric Soufer.

Forbes said that allegations include, "The Donald J. Trump Foundation donated $100,000 to the Eric Trump Foundation, with the intent of covering the costs for payments to a Donald Trump-owned property."

Ian Gillule -- an employee at the Trump National Westchester golf course between 2006 and 2015 -- made the accusations against the two charities.

“In the early years, they weren’t being billed [for the club] -- the bills would just disappear,” said Gillule to Forbes. “Mr. Trump had a cow. He flipped. He was like, ‘We’re donating all of this stuff, and there’s no paper trail? No credit?’ And he went nuts. He said, ‘I don’t care if it’s my son or not — everybody gets billed.'”

Former IRS official Marcus Owens told Forbes.com, "That appears on its face to be an indirect act of self-dealing.”

He added, “That is going to be of great interest to the attorney general of New York."

Neither charity would comment to Forbes about the accusations.