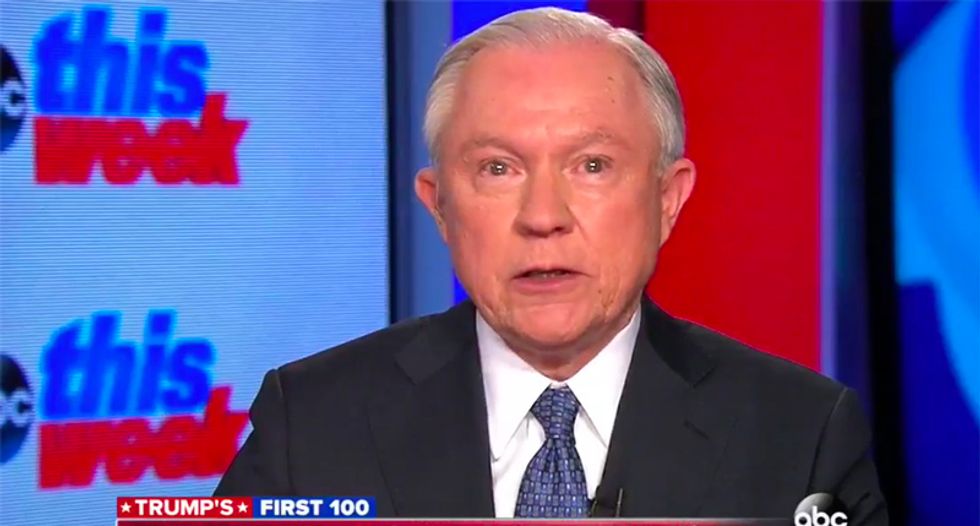 During his testimony before the Senate Intelligence Committee on Tuesday, Attorney General Jeff Sessions blamed his failure to disclose at least two meetings with Russian Ambassador Sergey Kislyak during his Senate confirmation hearing earlier this year on a “rambling question” from Senator Al Franken (D-MN).

“There is the assertion that I did not answer Sen. Franken’s question honestly at my confirmation hearing,” Sessions said Tuesday. "Colleagues, that is false. Former colleagues, that is false. Sen. Franken asked me a rambling question, after some six hours of testimony, that included dramatic, new allegations that the United States intelligence community has advised President-elect Trump that there was continuing exchange of information during the campaign between Trump's surrogates and intermediaries for the Russian government.”

But in video of the exchange between Franken and the attorney general, Sessions offers up that he “did not have communications with the Russians” unprompted by Franken, who was asking what Sessions, as attorney general, would do if "anyone affiliated with the Trump campaign communicated with the Russian government in the course of this campaign."  Sessions later had to amend his testimony following revelations of his two meetings.

Written testimony Sessions provided to the committee similarly denied contact with “any part of the Russian government about the 2016 election, either before or after election day.”

Sessions' lengthy explanation of how Franken's question threw him does not address his written answer to Leahy.… https://t.co/PA8jt454k4
— Dan Friedman (@Dan Friedman) 1497381657.0

Sessions on Tuesday claimed he was “taken aback” by Franken’s question. What the videos below: