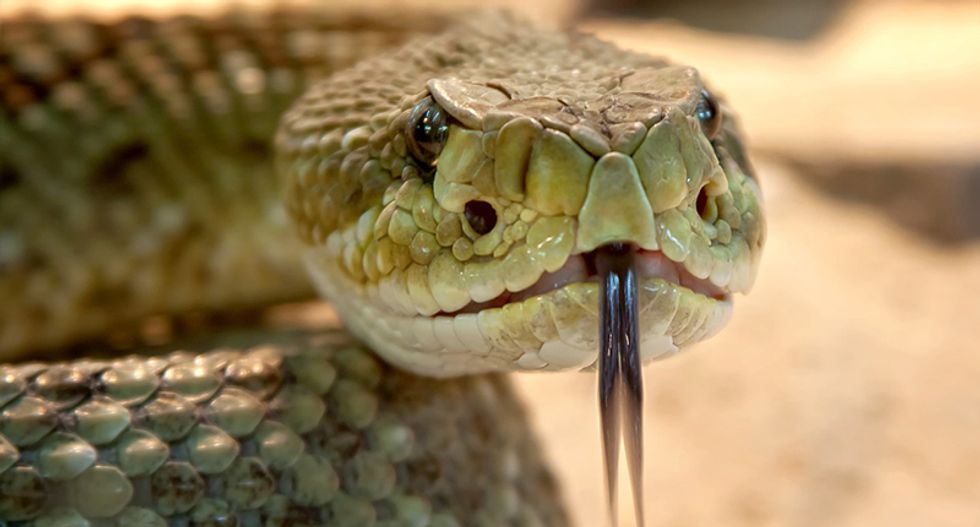 According to personal injury lawyer John Kemmrer Ivey, "the State of Texas and the school district doesn’t care" about children harmed due to negligence at school.

The Houston Press described the horrifying incident of a boy playing in a sandbox on the school playground when the ground caved in and he dropped into a den of rattlesnakes. He was bitten multiple times and nearly died, but because the incident didn't occur in a school vehicle, nothing can be done.

The reason is that Texas has the strongest laws in the country protecting schools against litigation. The only way a school can be sued is if an injury occurs in a motor vehicle.

Houston attorney Al Durrell's five-year-old son was carried upside down from the cafeteria to the principal's office and his jaw was broken in the process. The school called Durrell saying there was blood on his son and his clothing and they didn't know whose it was. When he picked up his son, the boy wasn't talking and pointed to his mouth. His father rushed the child to the dentist where two teeth had to be pulled and they discovered the broken jaw.

Court documents show program coordinator “Krystal Perkins stated that her elbow had come into contact with C.B.D.’s face in the hallway. Beth Bonnette [school principal] also stated that she had contact with C.B.D.” The third school employee involved was listed as a school administrator. C.B.D. are the initials used to protect Durrell's son's identity.

But despite his best efforts, the boy's father still doesn't know what happened, despite cameras recording the incident. The reason is that the school falls under the doctrine of sovereign immunity.

The State of Texas “has long recognized that sovereign immunity, unless waived, protects the State of Texas, its agencies, and its officials from lawsuits for damages, absent legislative consent to sue the State,” according to "A Synopsis of Texas and Federal Sovereign Immunity Principles." There's also a $100,000 cap on any damages given to a single person or a single incident.

Durrell was first told he could have a copy of the footage of the incident but was then told he'd have to subpoena it. A judge ordered the district to turn the tapes over. The district stalled until the deadline and then claimed the video was no longer available because someone "accidentally" recorded over it.

Durrell is taking the case to federal court because as a child diagnosed with ADHD and epilepsy, his son is "a member of a protected class" and can use federal civil rights statutes to charge Texas isn't willing to provide protections.

“Texans hear so much propaganda about ‘frivolous lawsuits’ in Texas that they assume you can sue for anything,” Ivey explained. “Unfortunately, public school districts and community colleges are protected from suits, about [almost] anything.”

While there is a single exemption for motor vehicle incidents, even after students have been injured on school buses the Houston school district has been able to have cases dismissed using other historic cases using the sovereign immunity.

One case involved a special needs student on a Houston elementary school bus, who was sexually assaulted by two other students. There were similar assaults at the school in the days leading up to the incident. The mother filed a suit alleging the district was negligent because they filed to operate security cameras on the bus. Lower courts let the lawsuit move forward but the school district appealed to the 14th Court of Appeals, where the suit was dismissed. They claimed the injury “did not arise from the operation or use of a motor-driven vehicle.”

The case is cited frequently by attorneys to defend itself against additional suits.

Another case involved an eight-year-old special needs student who had trouble staying in his seat on the bus. The school installed a harness to ensure he couldn't get out. One day, however, he got out, opened the emergency exit door and fell out of the bus.

He also made an argument that whether or not the harness was used properly “does not relate to the driver’s operation or use of the bus.”

These are just a few of many cases. In 1993 a case arose involving a bus driver letting a student off at a nondesignated stop where she was subsequently murdered. The school wasn't found to be culpable by the court because the murder didn't result from the movement of the bus.

Another student was stabbed on the bus and the court decided "the injury arose out of the failure to control the behavior of the bus occupants, rather than the operation and use of the motor vehicle.”

In case after case, the court has ruled it was the individual's fault, not the bus. The school, however, is immune from liability of individuals. As for teachers, if an injury is a part of a punishment, a teacher can be held responsible, but if it is as a result of an accident, the teacher probably isn't liable, Round Rock attorney Martin Cirkiel explained.

There is a case where a special needs student suffered from bullying to sexual assault and no school staffer ever intervened, despite requirements that his repeated attacker face an Admission, Review, Dismissal meeting.

“I think it would be great if Texas would allow a wider scope of liability,” Cirkiel told the Houston Press. “Right now public schools in Texas have no liability for injuries caused, and most parents don’t know that. They send their kids off to school every day. They’re going to be safe; they’re going to be taken care of. If anything does happen, surely the school district will make it right. That’s just not the way it is.”

Doing so would mean that those damages would be passed along to taxpayers. If taxpayers are forced to pay for lawsuit after lawsuit, they might demand accountability. But Cirkiel maintains that they're paying for it either way.

“What would be better for school districts is to put time, energy and money into training and accenting those things that prevent these types of occurrences. That would save a lot more money for everyone," he said.

Durrell’s complaint is that before he can do anything in court he has to exhaust the administrative appeals process at the school. In his case it took months as medical bills for his son piled up.

"If you Google my name in the court cases, you’ll find out that I’m the biggest loser,” attorney Martin Cirkiel said.

He explained that he refuses to take these cases to closed-door mediation meetings. The former social worker said that it was only natural he took up the cause for children injured at school

“I think it’s important that these cases are brought to the judiciary if not settled, and that gives us the opportunity to teach the judges about some of these issues: bullying, harassment, whether it’s based on race, religion or gender stereotypes or disability. These cases are important. I probably have 30 to 40 in various stages right now,” he continued.

Cases that don't go his way after children are hurt he blames on public policy.

“I was arguing a case before the Fifth Circuit Court of Appeals and one of the justices said to me from the bench — and it kind of came out in the written opinion rather subtly in both its verbal and written form — but the message was quite obvious: ‘Mr. Cirkiel, if we find there was discrimination based on disability for your client, it opens the gates.’ You have the public policy issue having schools be liable for all kinds of stuff," he said.

“They strictly construe the law even in its most expansive ways to eliminate school district liability,” he said, describe the court as "gatekeepers."

Durrell ultimately pulled his son out of school and put him in a special school for other kids diagnosed with ADHD and autism. The final blow came when his son was being restrained on a daily basis. The restraints pushed him into the ground and his son came home with a bloody nose and blood on his clothing. The teacher asked his son to say that another student had done it. Durrell didn't even try to go after the school a second time. He's still waiting on a ruling from the 14th Court of Appeals as to whether the first case can move forward. He just pulled his child out of the Houston elementary school for safety.

While he hopes some day his son can return to public schools, he said he'll never allow him to go back to Wilson Elementary.