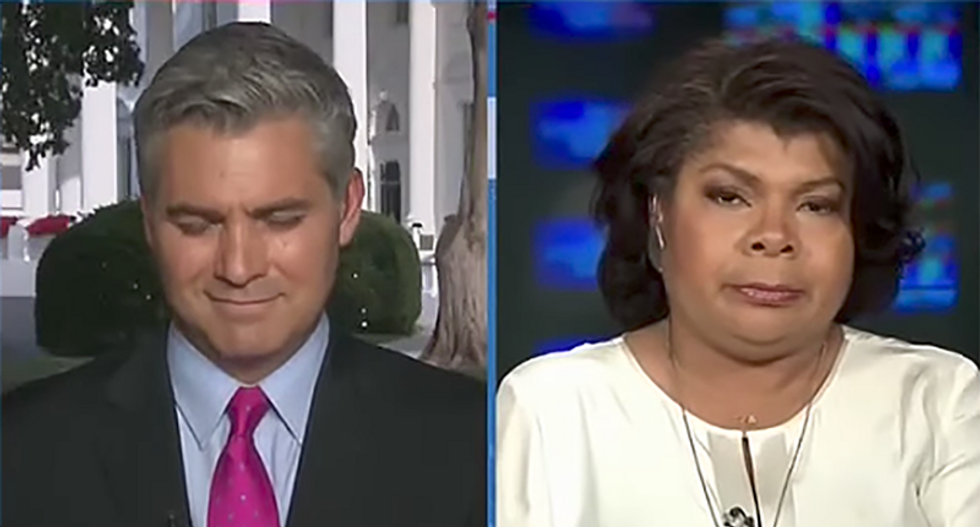 CNN’s Jim Acosta on Wednesday continued to take Donald Trump’s administration to task, blasting the White House for spearheading “the erosion of our freedoms in terms of covering the president of the United States.”

Acosta was speaking on “AC 360” after having called out deputy White House Press Secretary Sarah Huckabee Sanders, as well as the administration’s new no-camera policy on Twitter. American Conservative Union Chairman Matt Schlapp could not have agreed less.

“The White House administration gets to set the rules as to how they want to engage the press on the White House compound, and the press has the right to be able to say and cover those types of policies as they wish,” Schlapp said.

Schlapp argued that conservatives have become accustomed to a liberal press and learned to “take it in stride.” Former GOP presidents, he argued, have “complained to high heaven about the bias in the somewhat restrained when it came to doing that on air and on camera.” He argued Trump “has decided that he is going to call it like he sees it.”

White House Press Correspondents’ Association chief Jeff Mason countered that “any good reporter or good news organization, when they do get it wrong, issues a correction,” arguing most news organizations value transparency when it comes to correcting the record. Still, he said, the president’s attacks go too far.

“That is not the same as calling every story or television package or radio package that you don't like fake news,” Mason said. “I's just not the same.”

“The chyron on the screen says ‘Trump hates the press,’” Schlapp argued (the chyron read, “Trump attacks media; White House limits TV coverage”). “The nation has been at war for decades,” Schlapp added.

That’s when Acosta chimed in.

“I think that—and I asked this question of the president when he was running to win the White House: ‘Can you withstand the scrutiny that comes with being president of the United States?’—he didn't like that question,” Acosta explained. “He snapped at me during that news conference.”

“There are moments when this president is just really sensitive to criticism and he lashes out in this fashion,” Acosta added.

The CNN host, who’s made waves in media circles with his willingness to publicly criticize the administration for its’ lack of access to reports, noted the “coverage can get a little too negative sometimes,” but pointed out prior administrations have faced the head before.

“Coverage of the president is tough, but that's the territory we're in right now,” Acosta said.

“I think to paint everybody with a broad brush is just not the right thing,” the reported continued. “What we're witnessing right now is just this erosion of our freedoms in terms of covering the president of the United States. The president has only held one full news conference since the beginning of his administration, and that was in February. That's way behind the average of other presidents in modern times.”

Turning to the “issue of turning off the cameras in the briefing rooms”— a subject Acosta confronted White House Press Secretary Sean Spicer on earlier this week during an off-camera briefing—Acosta said the new sometimes-policy is “just preposterous.”

“Your freedoms are not being denied when the White House determines the method they want to brief the press,” Schlapp said. “That is their First Amendment.”

“We should be able to turn them on,” Acosta said, championing one of the other five rights listed in the First Amendment (assuming a White House’s “First Amendment right” includes not getting filmed by the U.S. press corps in the digital age.

Schlapp conceded that presidents “should do press conferences” and that “an administration that's not as open as the press would like has to suffer the consequence of reporters who are anxious about not getting their questions answered.”

But, he maintained, “this is for the white house to determine.”

“April, I love you and respect you,” Schlapp later said. “The American people are not staying up at night worried about whether CNN or MSNBC or Fox can get another question televised.”

“There is a reason why the press was baked into the Constitution,” Ryan replied. “Why there is a First Amendment.”