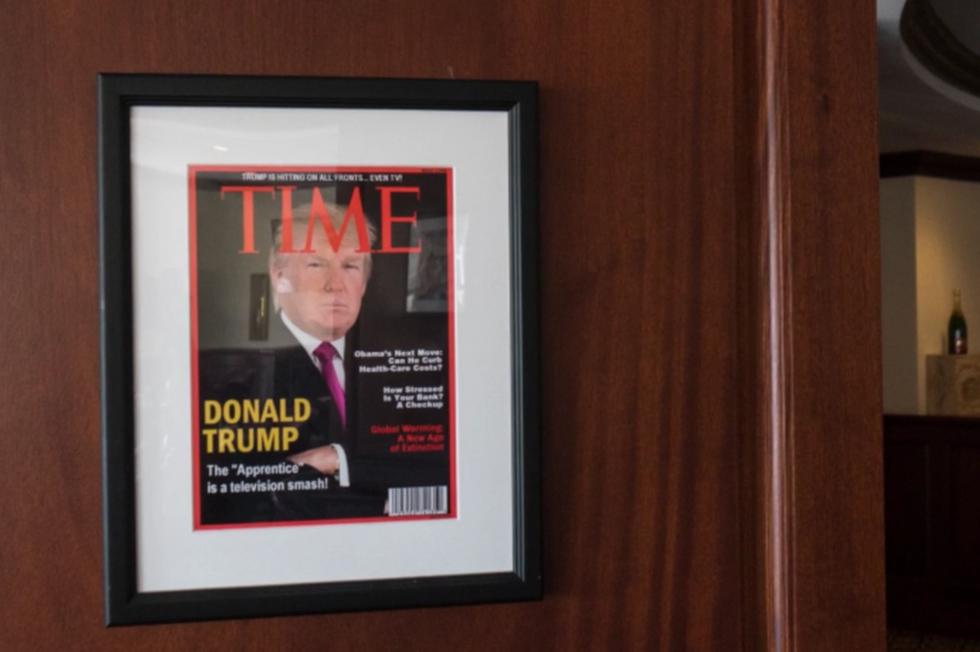 President Donald Trump has in the past appeared obsessed with being featured in Time Magazine -- and it turns out that he may be so obsessed that he might have ordered a fake Time cover with his photo on the front to be mounted in his golf courses.

The Washington Post's David Fahrenthold reports that at least four Trump golf courses have a fake Time cover of the president framed and displayed prominently on their walls.

The fake cover -- which is dated March 1, 2009 -- features a photo of Trump along with the caption, "Donald Trump: The ‘Apprentice’ is a television smash." Above the magazine's nameplate is another caption that reads, "TRUMP IS HITTING ON ALL FRONTS . . . EVEN TV!"

Fahrenthold says the cover is definitely fake because it "contains several small but telling mistakes," including a red border that "is skinnier than that of a genuine Time cover" and secondary headlines that are "are stacked on the right side."

However, Fahrenthold said he was not able to determine who created the fake cover, or why it was created in the first place.

That said, he also put it in the context of a broader pattern of Trump embellishing his own personal achievements.

"The cover seems to fit a broader pattern for Trump, who has often boasted of his appearances on Time’s cover and adorned his Trump Tower office with images of himself from magazines and newspapers. Trump has made claims about himself — about his charitable giving, his business success, even the size of the crowd at his inauguration — that are not supported by the facts," he writes.