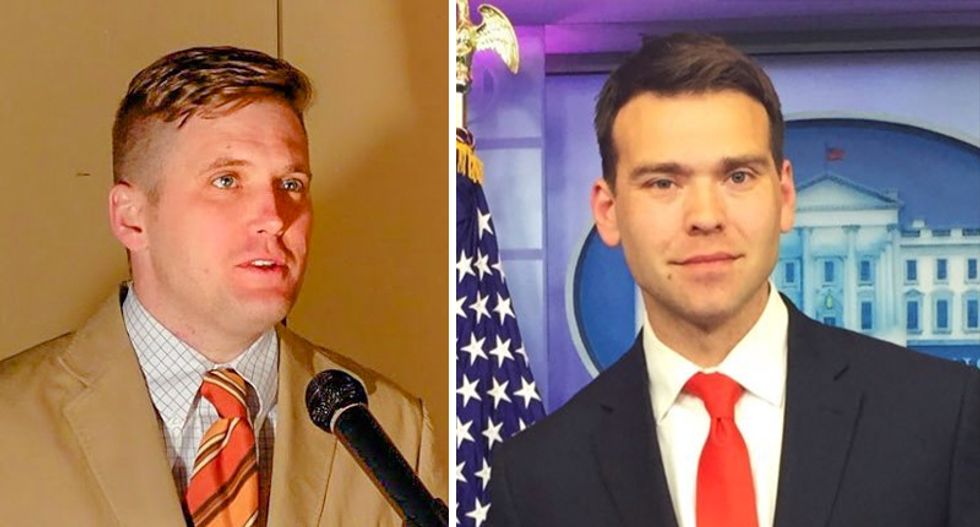 Two competing factions of President Donald Trump’s racist supporters rallied at a small event at the Lincoln Memorial over the weekend to speak out for their right to free speech and against political violence.

However, interviews conducted by the Daily Beast show the rally's most famous attendees seem to be turning on each other.

Emcee Jack Posobiec, who egged on Trump supporters taking to the stage of the New York Theatre's production of "Julius Caesar," said that Stone feared “security concerns.” But Spencer explained Stone wouldn't be caught dead in the sea of "pathetic" rally goers.

“It was actually far more pathetic than I had imagined," Spencer told the Daily Beast.

Some on the far right have toned down their violent rhetoric after an Illinois man opened fire on Republican congressmen earlier this month.

“It was a great event! I got a crowd of Trump supporters to sing ‘Give Peace a Chance’ by John Lennon and that’s a testament to our commitment to peace and our stand against violence and violent rhetoric,” said Posobiec, a PizzaGate conspiracy theorist.

The infighting has been going on since Trump was elected in November, resulting in online blows over "The Deplora-Ball," a right-wing inaugural event for Trump activists. That's when Posobiec and Cernovich began to be mocked as the “alt-lite.”

“I think a lot of those people are really against intelligent people,” Spencer said of the "other" rally. “If you’re a total goofball or someone who has no connection with the facts and reality, it’s like ‘ok you’re f*cking based.’ They’re all just bad human beings. So many of them are just physically ugly people.”

He explained that the good thing about the two groups clashing over the weekend was that it helped him to know who to "weed out" from the movement.

Posobiec said he "doesn't really follow" Spencer and dismissed claims his rally attendees were "ugly." He went on to say that he wants to see people like Donald Trump Jr., Sheriff David Clarke, Ann Coulter, Laura Ingraham, and “of course POTUS himself” attend rallies like this in the future. This time around, however, failed Republican Virginia gubernatorial candidate Corey Stewart did attend the weekend rally. Stewart didn't attend Spencer's rally held last year after the election.

As the rally died down, the two groups argued over whether which was right. Spencer wanted his supporters to focus on preserving the white race and white culture. Posobiec wanted to see an alternative to the lying, "fake news" media.

“This is the just the beginning for us,” Spencer claimed. “I think it would be possible to have a rally on the mall for tens of thousands of people.”

Posobiec agreed it wasn't the end of his group either.

“I want to have rallies all across the country, we are organizing and growing by leaps and bounds,” he said.