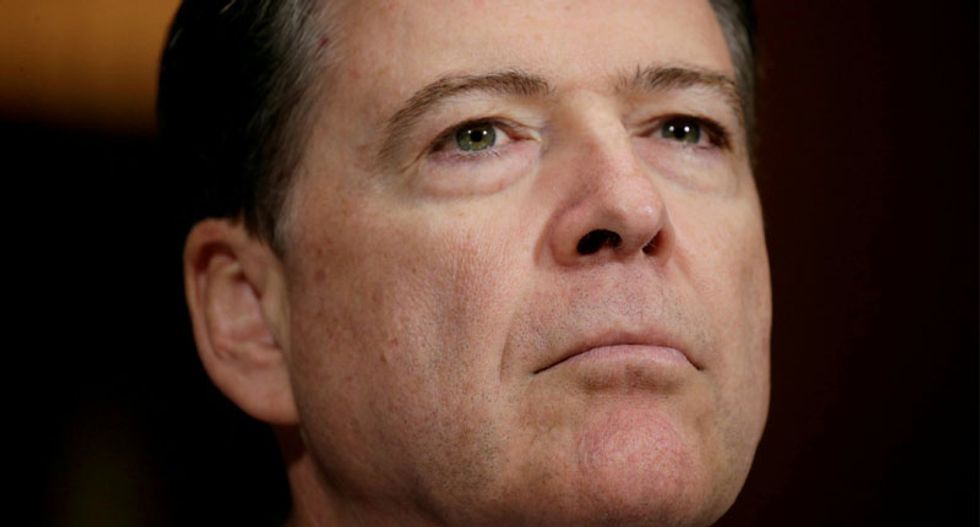 FBI Director James Comey arrives to testify before a Senate Judiciary Committee hearing on "Oversight of the Federal Bureau of Investigation" on Capitol Hill in Washington, U.S., May 3, 2017. REUTERS/Kevin Lamarque/File Photo

Former FBI Director James Comey will tell Congress on Thursday that President Donald Trump repeatedly urged him to halt a probe into his former national security adviser's ties to Russia and to declare publicly that Trump himself was not being investigated.

Comey's testimony in the most widely anticipated congressional hearing in years will put the spotlight on whether Trump's comments about the Russia investigation were an attempt to obstruct the FBI probe that has dogged his 5-month-old presidency.

THE HEARING IS SCHEDULED TO BEGIN AT 10:00 A.M. ET. WATCH LIVE STREAMING VIDEO BELOW:

The outcome of Comey's testimony could have significant repercussions for Trump's 139-day-old presidency as special counsel Robert Mueller and multiple congressional committees investigate whether Trump's campaign team colluded with Russia to influence the 2016 presidential election.

The White House and Russia deny any collusion has occurred.

In written testimony released by the Senate Intelligence Committee on Wednesday, Comey quoted Trump as telling him the Russia investigation was a "cloud" that impaired his ability to operate as president.

In a one-on-one meeting in the Oval Office on Feb. 14, Comey's statement said, Trump asked him to drop an investigation of former national security adviser Michael Flynn, part of a wider probe into Russia's alleged meddling in the 2016 presidential election.

"I hope you can see your way clear to letting this go, to letting Flynn go," Comey quoted Trump as saying.

Comey said Trump told him during a one-on-one dinner on Jan. 27 that he needed "loyalty."

Trump fired the FBI chief on May 9, setting off a political fire storm, and he has since called Comey a "showboat" and a "grandstander."

Democrats and some Republicans on the committee will use the hearing on Thursday to press for further details of any attempts by Trump to blunt the Russia investigation.

In a statement on Thursday ahead of the hearing, Warner said Trump appeared to threaten Comey's job in one meeting while demanding loyalty, and in another, urged him to drop the Flynn investigation.

"I do want to emphasize what is happening here - the president of the United States is asking the FBI director to drop an ongoing investigation into the president’s former national security adviser," Warner said in the statement.

On Wednesday, Democratic Senator Ron Wyden he was very concerned about the loyalty comments.

"That is another way the president sought to impede the investigation," he said.

Republican Senator Richard Burr, the panel's chairman, sought to downplay the remark, saying: "I don't think it's wrong to ask for loyalty from anybody in an administration."

Trump's attorney, Marc Kasowitz, released a statement on Wednesday saying the president felt vindicated by Comey's acknowledgement that Trump was not personally under investigation.

Despite landing himself in other political controversies, including his handling of the FBI investigation of 2016 Democratic presidential nominee Hillary Clinton's private email server, Comey is widely seen as cautious and fact-oriented.

"One thing you don't ever hear about him is (that) people don't think he tells the truth. He brings a lot of credibility," said Benjamin Wittes, a Comey confidant and senior fellow at the Brookings Institution.

Less than five months into office, Trump has proven himself to be impulsive and visceral, turning to Twitter to lambaste perceived adversaries.

As Comey's written testimony underscored, he and the U.S. president had an awkward, topsy-turvy relationship.

Then-presidential candidate Trump excoriated Comey last summer for deciding not to prosecute Clinton over her handling of government emails, then praised Comey when he reopened the issue in October, just days before the election.

Trump initially kept Comey on as FBI director, and publicly embraced him at a January White House event. Two days after firing him, Trump said it was because of "this Russia thing."

Trump is widely expected to use his Twitter account, which lists 31.8 million followers, to counterpunch at Comey on Thursday, perhaps even in real time.

The Republican president's unconstrained use of Twitter, often early in the morning, has confounded allies and skeptics alike.

"Every time you tweet, it makes it harder on all of us who are trying to help you. I don’t think you did anything wrong. Don’t get in the way of an investigation that could actually clear you," Republican Senator Lindsey Graham told Fox News on Wednesday.

Despite the high drama, Comey is not expected to drop any major new bombshells, or directly accuse Trump of trying to obstruct justice by asking him to halt the FBI probe of Flynn.

He is also unlikely to reveal new details of the Russia investigation. U.S. law enforcement officials said Comey had discussed his testimony with Mueller's investigative team to ensure it did not interfere with the special counsel's probe.

Still, Ryan said the testimony, and senators' questions, would be historic.

The closest comparison, he said, was the appearance 44 years ago of President Richard Nixon's White House counsel John Dean, who, after being fired by Nixon, gave damning testimony in 1973 to the Senate Watergate Committee.