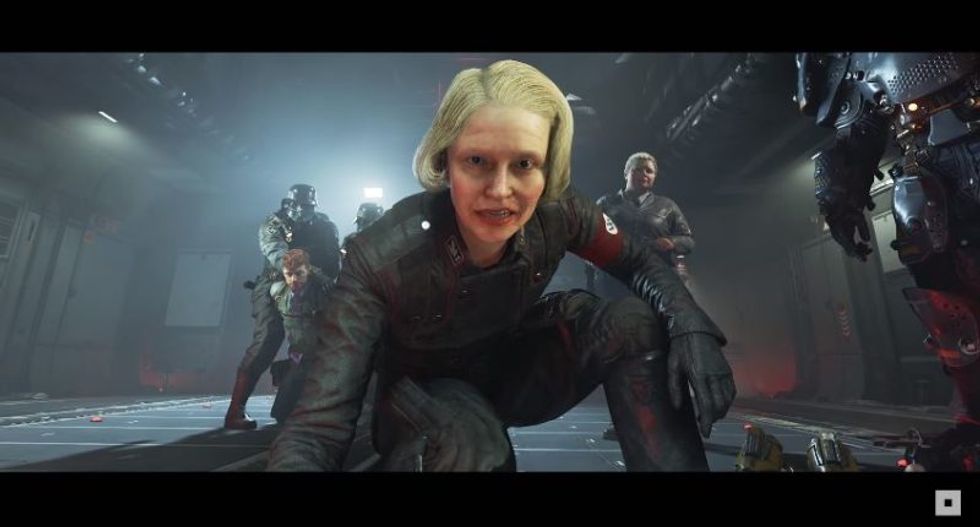 A Nazi villain in the "Wolfeinstein II" trailer (via Youtube screengrab).

According to The Verge and Vice, members of the online alt-right and white nationalists movements are upset that Nazi and KKK villains in the new Wolfenstein II: The New Colossus game are portrayed negatively. They are also calling the game and Bethesda Softworks, the company that created it, "anti-white" in favor of "political correctness."

According to Vice, Wolfenstein II is set in a dystopian "alternative history" where Nazis won World War II. Users play as "William 'B.J.' Blazkowicz," and "form a resistance and kill many Nazis in a gory, disgusting fashion."

In comments on the trailer for the game and threads about it on 4chan and Reddit, alt-right users expressed anger over the portrayal of Nazis as villains, and one anti-Semitic commenter on the YouTube trailer claimed that "nationalism and heritage is bad" unless it comes to Jewish people.

The bigoted complaints didn't stop there -- one 4chan user claimed Bethesda is "trying to destroy [the] gaming industry with political correctness f*ggotry."

Still others were upset that the game featured a black female character, and used both racist slurs and dog-whistles decrying the "Black Lives Matter overtone" of the game. One scene featured the character calling a white villain "white boy," and a Youtube commenter with an Alex Jones avatar claimed it was proof of the "racist agenda against white people."

You can read more of the bigoted comments on the Wolfenstein II trailer via The Verge and Vice, and watch the trailer below, via Bethesda Softworks.