Ex-Obama aide: White House leaks look like they are throwing Trump Jr. to the wolves to save Jared Kushner 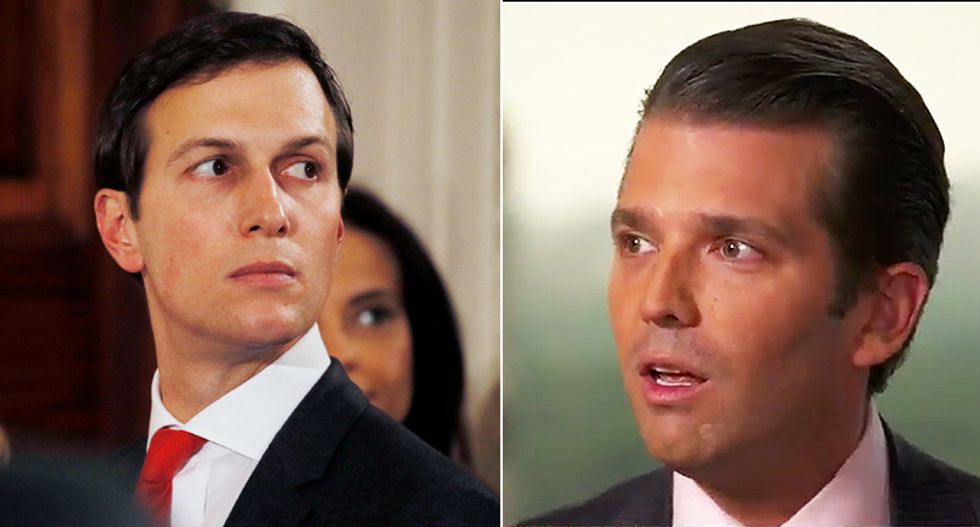 Appearing on MSNBC Monday night, a former aide to President Barack Obama questioned the way leaks about Donald Trump Jr. meeting with Russians before the election were being doled out and speculated it was to make the president's son the scapegoat and draw attention away from Trump son-in-law Jared Kushner.

Referring to the latest bombshell about Donald Trump Jr., "Last Word" host Lawrence O'Donnell asked former Obama official Ron Klain if it looked to him like the White House would prefer Trump Jr. be the one who investigators are looking at.

"It seems to me that the Trump administration knew this was coming out," O'Donnell began. "Manafort disclosed it, the House investigators know it. Now it's on Jared Kushner's disclosure form finally, and it represents a possible crime in Jared Kushner's case because he did not put it on his original disclosure forms. So at some point, the Trump administration has the decision: do we want to see this thing come out in the middle of a House hearing that Jared Kushner is the witness at -- where it lands as a bombshell on Jared Kushner -- or do we want it to come out before that and maybe come out with Donald Trump Jr. being the star because Donald Trump Jr. doesn't face the same criminal liability as Jared Kushner does?"

"Yeah. you know, they're shaping up for a very interesting Thanksgiving dinner in the Trump household," Klain joked. "I mean, it does feel to me, kind of like you implied, that perhaps this story was put out and hung on Donald Trump's son to move it away from Donald Trump's son-in-law, who definitely has more legal exposure, who is right in the heart of the White House, who's in the middle of all these policy matters, who played a role in firing FBI Director [James] Comey, who supposedly is one of the people who advised the president to fire Director Comey, who has been threatening your colleagues here at MSNBC with bad stories and all these things."

"It may well be, as incredible as this is, that this was an effort by the Trump White House to hang this on Donald Trump Jr. and move it away from Jared Kushner," he speculated.