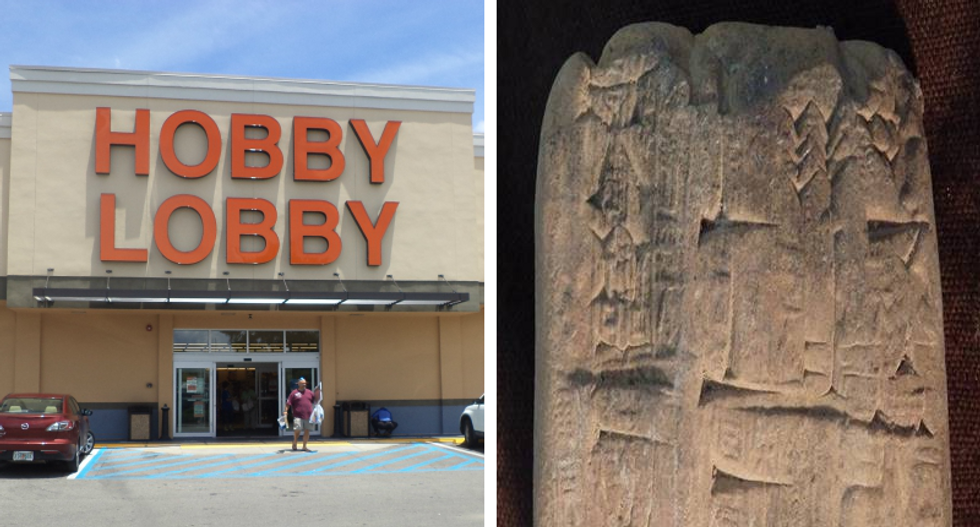 Hobby Lobby by Michael Rivera and image of a Cuneiform Tablet via the Department of Justice.

“The protection of cultural heritage is a mission that [Homeland Security Investigations] and its partner U.S. Customs and Border Protection (CBP) take very seriously as we recognize that while some may put a price on these artifacts, the people of Iraq consider them priceless,” stated Special Agent-in-Charge Angel M. Melendez.

The Department of Justice also filed a "stipulation of settlement" with Hobby Lobby in which the arts-and-crafts retailer will pay a $3 million fine and consent to the forfeiture of the artifacts in question.

Today's action will end the civil case. There is no word yet on potential criminal prosecution.

ISIS is reportedly receiving hundreds of millions in funding per year from selling stolen antiques on the black market.

"Around 100,000 cultural objects of global importance, including 4,500 archaeological sites, nine of which are included in the World Heritage List of ... UNESCO, are under the control of the Islamic State ... in Syria and Iraq," Russian Ambassador to the United Nations Vitaly Churkin wrote in an April letter to the U.N. Security Council. "The profit derived by the Islamists from the illicit trade in antiquities and archaeological treasures is estimated at U.S. $150-200 million per year."

According to facts stipulated by both sides, "in or around 2009, Hobby Lobby began to assemble a collection of historically significant manuscripts, antiquities and other cultural materials. In connection with this effort, Hobby Lobby’s president and a consultant traveled to the UAE in July 2010 to inspect a large number of cuneiform tablets and other antiquities being offered for sale (the “Artifacts”). Cuneiform is an ancient system of writing on clay tablets that was used in ancient Mesopotamia thousands of years ago."

“American collectors and importers must ensure compliance with laws and regulations that require truthful declarations to U.S. Customs and Border Protection, so that Customs officers are able to scrutinize cultural property crossing our borders and prevent the inappropriate entry of such property,” stated Acting United States Attorney Bridget M. Rohde. “If they do not, and shippers use false declarations to try to clandestinely enter property into the United States, this Office and our law enforcement partners will discover the deceit and seize the property.”

The government’s case is being handled by Assistant United States Attorneys Karin Orenstein and Ameet B. Kabrawala.

Hobby Lobby is no stranger to controversy.

The landmark legal decision in Burwell v. Hobby Lobby occurred after the retail giant fought all the way to the Supreme Court to deny birth control to employees. The court recognized the claim that the corporation has religious beliefs.