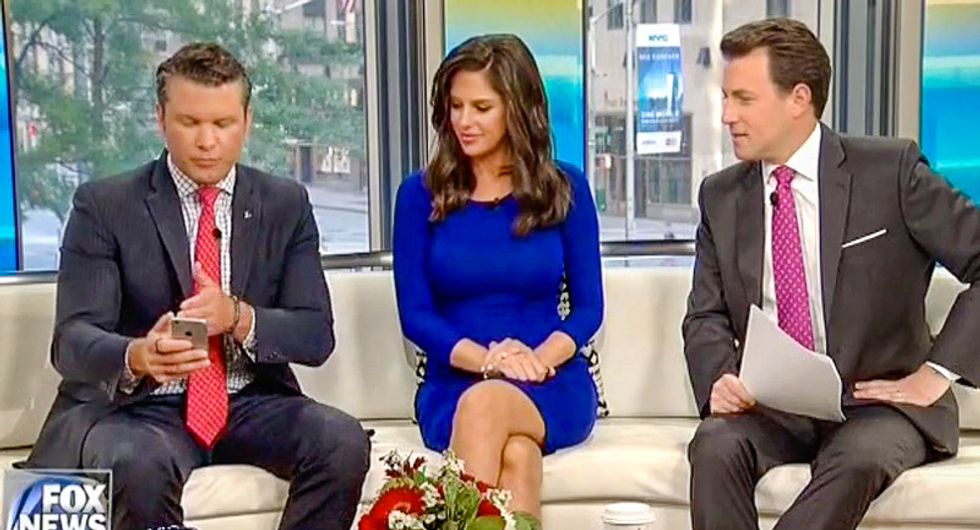 Fox & Friends hosts on Sunday praised President Donald Trump as "genius" for a series of tweets that depicted his version of what was said during a recent meeting with Russian President Vladimir Putin.

In the Sunday morning tweet storm, Trump attacked the Democratic National Committee, slammed the media and revealed plans to set up a "cyber security unit" with Putin.

The Fox News host argued that Trump had to go after the media for incorrectly reporting that 17 intelligence agencies agreed that Russia meddled in the U.S. election. The New York Times has criticized Trump for this claim, noting that it was "misleading and suggests widespread dissent among American intelligence agencies when none has emerged."

"You know why he has to tweet it though?" Fox News host Abby Huntsman opined. "Because you saw the corrections that were made about that. It was buried on a Friday night. One of them was like at the back of the paper. A lot of people don't read full papers anymore."

Co-host Pete Hegseth agreed that tweeting was the best way for Trump to get his message to the American people.

"If he doesn't tweet it, it doesn't get out there," Hegseth insisted. "He wants to drive the news because the news is being driven against him. It's actually genius."

The Fox News host concluded by complaining that news agencies that covered Trump's tweets "are doing it in a derogatory way."