‘My inflatable doll is a lesbian’: White House calls go off the deep end after Trump gets healthcare blindside 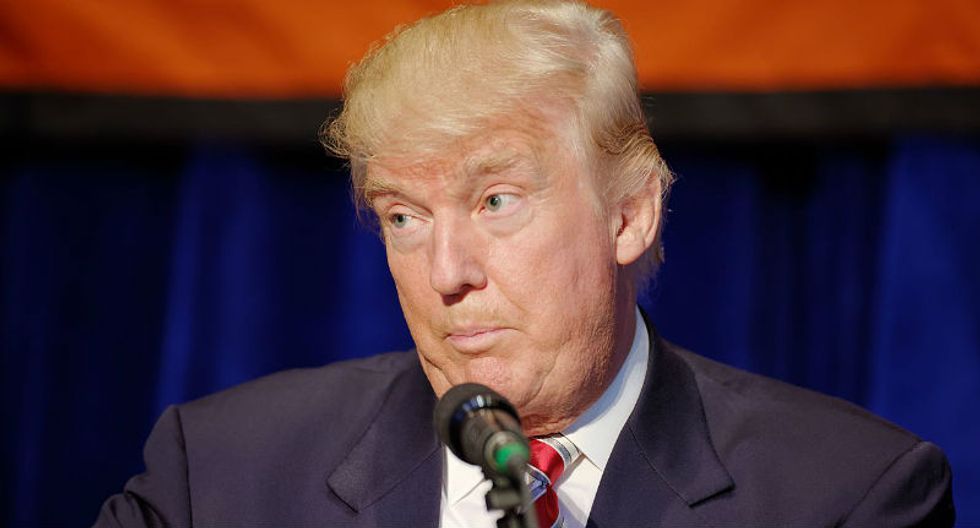 Late Monday it was announced that two more Republican Senators were opposed to the repeal and replacement of the Affordable Care Act, known as Obamacare. The White House and President Donald Trump himself were so blindsided by the revelation awkward and embarrassing conversations were overheard by reporters on press calls.

"My inflatable doll is a lesbian," said one unmuted voice during a White House call during a briefing on Iran, according to CBS News reporter Jackie Alemany.

Politico reported early Tuesday that Trump was having a group of influential senators to dinner for steak and succotash. During the dinner Sens. Mike Lee (R-UT) and Jerry Moran (R-KS) announced at the same time that they were voting against the GOP healthcare bill, effectively killing it from passage. The Moran-Lee tweets call into question the president's ability to master the art of Washington deal-making.

Trump had no idea it was coming, said several White House and congressional officials. The White House took to the phones asking Senate Majority Leader Mitch McConnell what happened. They were frustrated after all of the work, delays and negotiation with their own party.

It wasn't long before Trump took to Twitter to blast Lee and Moran for their "no" pledge.

“Republicans should just REPEAL failing ObamaCare now & work on a new Healthcare Plan that will start from a clean slate. Dems will join in!” he wrote.

Aides explained that Trump was fine leaving the policy details to the senators – as “long as something gets done.” It didn't, but now it's unclear if Trump will get more involved.

Politico explained that Trump's goal has always been about winning on the repeal and replacement. Those close to him revealed that he doesn't care about the policy, he simply wants to make the deal.

“Nobody knew health care could be so complicated,” Trump said in February.

“He told us months ago, we could just let it blow up and blame the Democrats,” an activist who met with Trump said.

Trump had a large Rose Garden celebration after the passage of the House bill and long before the Senate got its hands on the bill. Veteran politicians who warned the celebration was premature proved to be correct.

Among his friends, Trump has wondered why legislators refuse to listen to him.

“None of the people at the dinner were the ones they should have been worried about,” said an individual involved in the discussions.

Trump's super PAC ran ads against endangered Sen. Dean Heller (R-NV) after he left the negotiation table. Heller is one of few Republicans up for reelection in 2018. Spokesperson Katrina Pierson said that the ads attacking Heller were to bring him back to the table to talk. Both Lee and Moran were reelected in 2016 and are from solidly red states.

Trump and McConnell were prepared to make similar official statements at the same time on Monday after the news but Trump tweeted his message before the majority leader could release his statement. The tweet reportedly took staff by surprise.

“There it is,” said an aide said just moments after swearing a response would come in "an hour."

“Regretfully, it is now apparent that the effort to repeal and immediately replace the failure of Obamacare will not be successful,” McConnell's statement said from spokesman Don Stewart.