'This is the last call we'll have': Trump's new lawyer sends cryptic message to Rachel Maddow 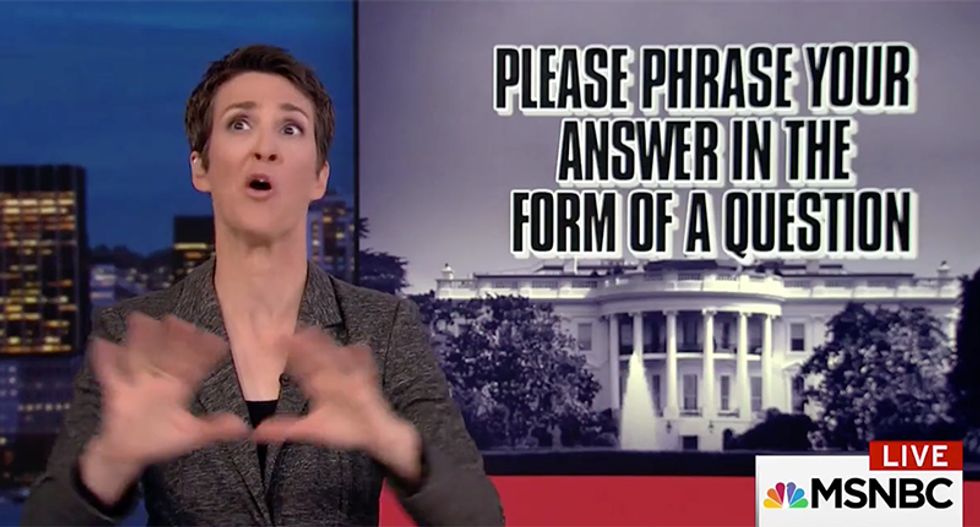 Rachel Maddow during a segment on 7/21/17 (image via screengrab).

The White House is breaking the glass and sounding the alarm over the Russia investigation, according to MSNBC's Rachel Maddow.

Maddow began her segment with a bombshell observation: that Marc Kasowitz, President Donald Trump's attorney who had his own email scandal last week, appears to either have been demoted from or left his role as the president's senior counsel in the Russia investigation. He's been replaced, Maddow noted, by D.C. lawyer John Dowd.

Beyond the legal shakeup, however, was a second observation -- that reports of Special Prosecutor Robert Mueller has begun investigating the president's finances in spite of Trump's apparent warnings to him has sent the White House into a tailspin.

Paired with another report about Deutsche Bank's relationship with Trump coming under scrutiny, Maddow said, the news of the financial turn of Mueller's probe has put the White House on high alert.

"The White House is going nuclear," Maddow said. "Like, break glass in case of emergency -- they were smashing the glass last night."

In tracking down aspects of the initial Bloomberg report about Mueller looking into the president's finances, Maddow and her team ended up snagging a bizarre interaction with Dowd himself.

"'Those transactions are in my view well beyond the mandate of the special counsel," Dowd was quoted as saying in Bloomberg. "'They're unrelated to the election of 2016 or any alleged collusion between the Trump campaign and Russia and most importantly, they are well beyond any statute of limitations imposed by the U.S. Code.'"

To get to the bottom of it, her producer contacted Dowd -- and got through to him.

"We have no evidence that any of these [Trump business] entities are under investigation," Dowd told Maddow's producer. "I'm beginning to think it's not true. I'm beginning to wonder where the hell it came from."

He then finished the call by telling the producer, "this is the last call we'll ever have."

"Some days are weirder than others in this job," Maddow concluded. "But you never really expect them to get that weird in conversation with the lead attorney for the president of the United States."

Watch Maddow discuss the White House's nuclear mode and her bizarre interaction with Trump's lawyer below, via MSNBC.