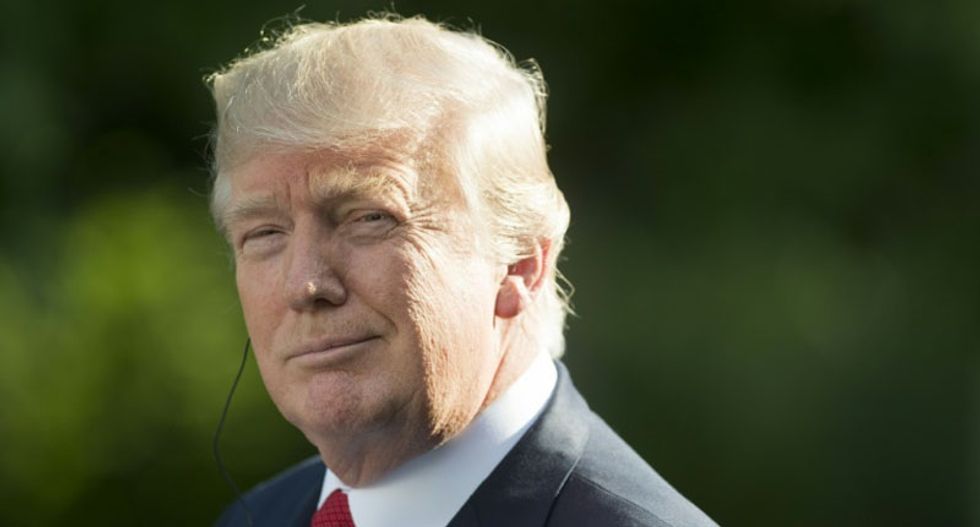 President Donald Trump continued a Twitter flurry Saturday morning by accusing former FBI Director James Comey of "crimes" and demanding to know why Attorney General Jeff Sessions or a "special council" have not investigated him.

Starting bright and early Saturday morning, Trump has furiously tweeted -- ten times in 2 hours -- on a variety of subjects from Hillary Clinton to Obamacare.

"So many people are asking why isn't the A.G. or Special Council [sic] looking at the many Hillary Clinton or Comey crimes. 33,000 e-mails deleted?" Trump tweeted before defending his son, Donald Trump Jr. over his emails, writing: "My son Donald openly gave his e-mails to the media & authorities whereas Crooked Hillary Clinton deleted (& acid washed) her 33,000 e-mails!"

You can see those tweets and quite a few more below:

In all fairness to Anthony Scaramucci, he wanted to endorse me 1st, before the Republican Primaries started, but didn't think I was running!
— Donald J. Trump (@Donald J. Trump) 1500725441.0

The Republican Senators must step up to the plate and, after 7 years, vote to Repeal and Replace. Next, Tax Reform and Infrastructure. WIN!
— Donald J. Trump (@Donald J. Trump) 1500725874.0

ObamaCare is dead and the Democrats are obstructionists, no ideas or votes, only obstruction. It is solely up to the 52 Republican Senators!
— Donald J. Trump (@Donald J. Trump) 1500726210.0

During an appearance on Saturday with MSNBC's Ali Velshi, former federal prosecutor Cynthia Alksne claimed she expected the 11th Circuit Court of Appeals to come down hard on U.S. District Court Judge Aileen Cannon over rulings that have protected Donald Trump from a Department of Justice investigation.

Cannon, who was appointed to the bench by the former president just before he lost the 2020 election, has been under scrutiny for a series of rulings that have baffled legal experts and stymied DOJ investigators looking into Trump whisking away stolen government documents to his Mar-a-Lago resort.

During an appearance on MSNBC's "The Katie Phang Show" early Saturday, former U.S. Attorney Joyce Vance said Donald Trump appears to have suffered two major legal setbacks just before Thanksgiving and then added one of them may have an immediate impact on his future.

Speaking with the host, Vance focused on the 11th Circuit Court of Appeals and an expected likely ruling that will give the Department of Justice free rein to pursue their investigation into stolen government documents the former president squirreled away at his Mar-a-Lago resort.

Is it a pipe dream or a possibility? Elon Musk wants to meaningfully diversify Twitter’s revenue stream beyond advertising, but no major social network has managed so far to go without ads altogether.

Something of a gold standard, social media ads can be fine-tuned and tailored to individual users on a mass scale, and have been particularly lucrative for Meta's Facebook and Instagram, as well as Google.