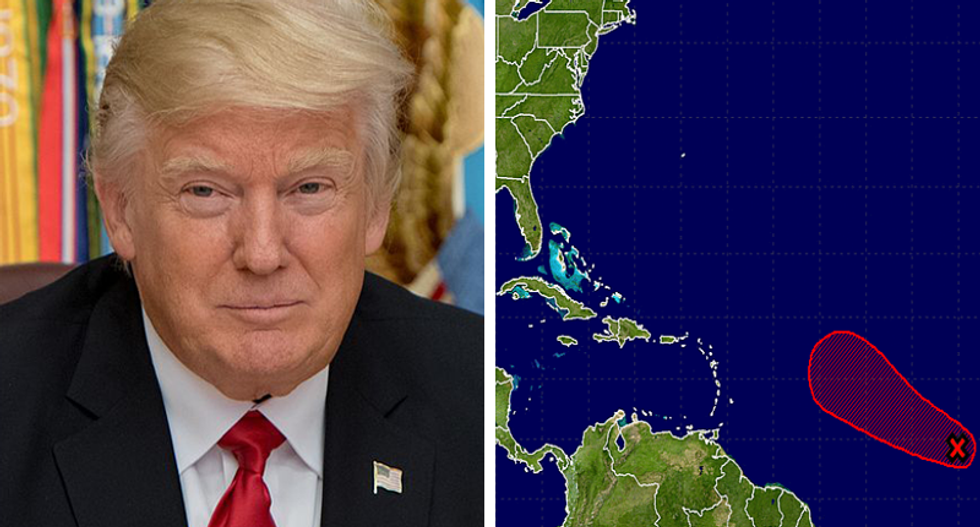 Hurricane forecasters are warning of potentially catastrophic destruction – from the budget of President Donald Trump, as an Atlantic storm is likely to form into Tropical Storm Don.

"President Donald Trump proposes to cut $250 million from the National Oceanic and Atmospheric Administration, which oversees the National Weather Service," the New Orleans Times-Pacayune reports. "Although the 2018 budget blue book for NOAA states the proposal prioritizes the need for 'timely and accurate' weather forecasts, some warn that the cuts could could reduce important operations that help meteorologists study weather systems."

"It's hanging on really by a thread in terms of funding," chief hurricane forecaster James Franklin told the AP. Franklin retired June 30 after a 35-year career with NOAA, the National Oceanic and Atmospheric Administration.

Meanwhile, an Atlantic storm is threatening to organize into a tropical storm. If the low-pressure system continues to develop, it would be named Tropical Storm Don and then, even Hurricane Don.

"AccuWeather CEO Barry Myers has been named as a frontrunner for the position of NOAA administrator in Trump's administration, and the company has at times butted heads with the weather service over competitive issues," the Time-Pacayune reminded.