Unemployed ex-Carrier worker: Trump 'blew smoke up our asses' with a 'sh*t-eating grin' on his face 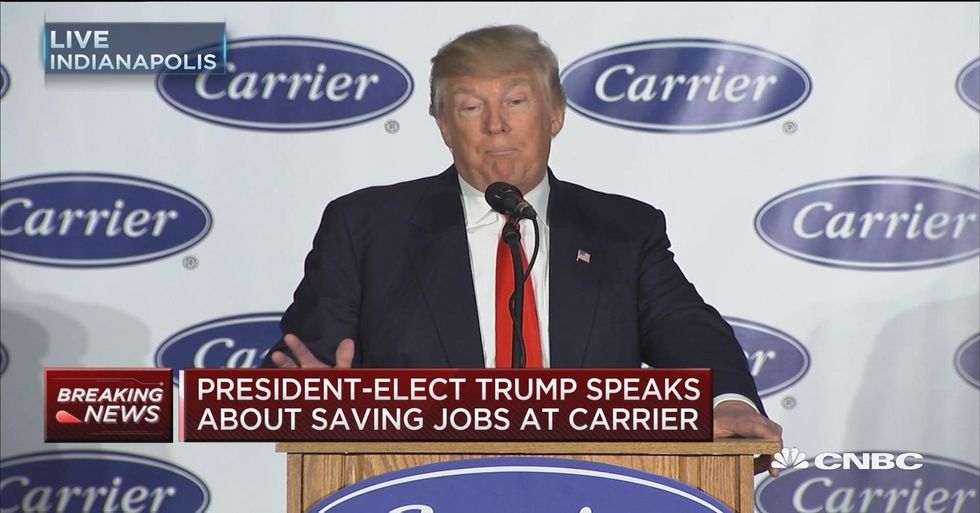 A woman who worked at the Carrier Corporation for the past 25 years unloaded on President Donald Trump in an interview with the New Yorker, just days after she agreed to take a buyout from the company.

Even though Trump pledged to save jobs at the Carrier plant late last year, the company this week laid off 300 employees in what is expected to be just the first round of layoffs.

Brenda Darlene Battle, a 55-year-old Indianapolis native, decided to accept a buyout from the company before the layoffs began. Newly unemployed, she opened up to the New Yorker about how terribly Carrier had treated its employees over the last several months.

"It used to be a fun place to work; I didn’t mind going," she explained. "Then they started making changes that only benefit them: robots, cutting jobs. Just yesterday, they were talking about cutting a three-man blower-shelf crew—they deal with the forms that hold the blower on one side and the heating element on the other—down to two. But two people can’t do that job."

She then reflected about Trump's visit to Carrier last December -- and said she believed it was a setup to make Trump look good while still keeping in place plans for mass layoffs.

"I think the C.E.O. of Carrier and Trump was in bed together the whole time," she said. "That day Trump came to Carrier, those two were too chummy. The way they sniggled and giggled. That sneaky kind of sh*t-eating grin."

As for what she'll do now, Battle says that she will spend some time with her 77-year-old father.

"He thinks Trump blew smoke up our asses, too," she said of her father.