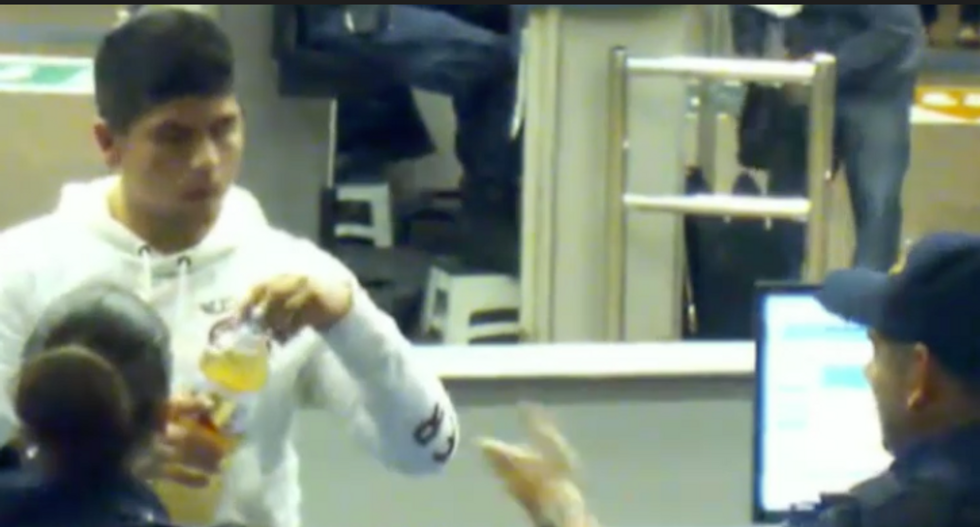 The 2013 video shows the officers examine the two bottles, then give the OK for Valezquez to consume the liquid. The teenager later became agitated and started shouting “my heart” in Spanish.

“I never asked him to. He volunteered to and I believe I gestured to him to go ahead,” Perallon insisted.

But James Tomsheck, former head of internal affairs at U.S. Customs and Border Protection, told ABC News if the officers suspected the bottles contained a controlled substance “they should've conducted a field test.” Tomsheck said the agents violated protocol by allowing the teen to drink from the bottles.

“What you see, I think, is a basic lack of compassion and decency toward a 16-year-old boy,” the Velazquez family lawyer Eugene Iredale told ABC. “Almost a delight that you would see in children who just pull the wings off flies slowly, a smile when he's being asked to drink something and being put in this position.”

“They know what’s going on,” Iredale said. “This is a game in which he is being played with.”

“Drug smuggling is wrong and is a crime, but this teenage boy did not deserve a death sentence,” Rep. Zoe Lofgren (D-CA), ranking member of the House Subcommittee on Immigration and Border Security said. “For CBP officers to inflict a summary death sentence is not only immoral, but also illegal.”

“How can the government allow that?” Velazquez’s sister, Reyna Velazquez asked. “It’s like, OK you can kill someone.”

“They took him as a fool, as who cares,” she continued. “Well, that fool, he was the greatest person I ever knew.”

Watch the video below, via ABC News:

On Monday, the Dallas Observer reported that Katherine Schwab, the North Texas Capitol rioter who became infamous for flying to D.C. in a private jet to join the mob storming the U.S. Capitol, faces a new charge.

"The government slapped Colleyville's Katherine 'Katie' Staveley Schwab with an additional charge for her alleged involvement in the insurrection," reported Simone Carter. "According to court documents, Schwab 'willfully and knowingly engaged in an act of physical violence' on Capitol grounds on Jan. 6, when supporters of former President Donald Trump stormed the building, egged on by Trump's false claims that the presidential election was stolen from him."