'You know that's not true': ABC host nails Sanders for lying minutes after she vows to 'absolutely' never lie 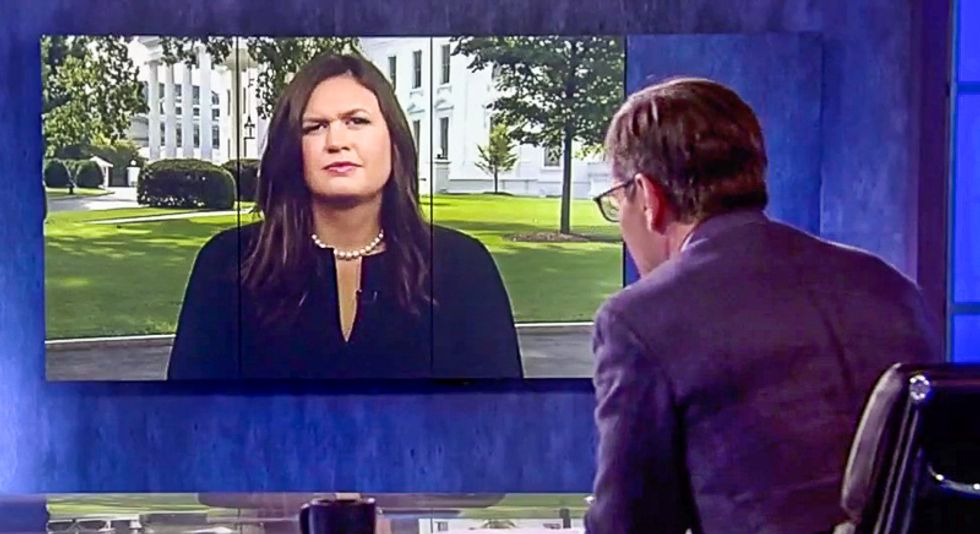 White House Press Secretary Sarah Huckabee Sanders was accused of knowingly not telling the truth on Sunday just minutes after she promised to always tell the American people the truth.

During an interview on ABC News, This Week host George Stephanopoulos asked Sanders how she would approach her new role replacing Sean Spicer as press secretary.

"Do you promise to try the always tell the truth from that podium?" the ABC host queried.

"Absolutely," Sanders vowed. "Not just to you. I think that is our duty, certainly. I have three young kids. I want to go home and be able to look them in the eye every day. That's far more important to me to be able to do that and have that highest level of honesty and integrity. I want to do that in every single thing I do. Not just my job. This is an extension of me being able to do that. I'm excited and honored to do it."

Stephanopoulos later noted that President Donald Trump and his staff had "not been straight about exactly what happened" regarding Russia's interference in the U.S. election.

"In fact, the attorney general first said he never had a meeting with Russians," Stephanopoulos said. "Now you have a new intercept that says he did talk about the campaign."

"The media loves to talk about it only when it comes to President Trump," she continued. "They've been doing it for almost a year. They've come up with nothing when there's real issues with some of the activities that the Democrats took place in."

"You know that's not true," Stephanopoulos replied. "You know for many months that you and the president and his teams denied any contact with the Russians. Just in the last couple of weeks, we've seen those contacts revealed. That's why Don Jr. is going to have to appear before the Senate. That's why Jared Kushner is appearing before the Senate as well. This is not a made-up story from the press."