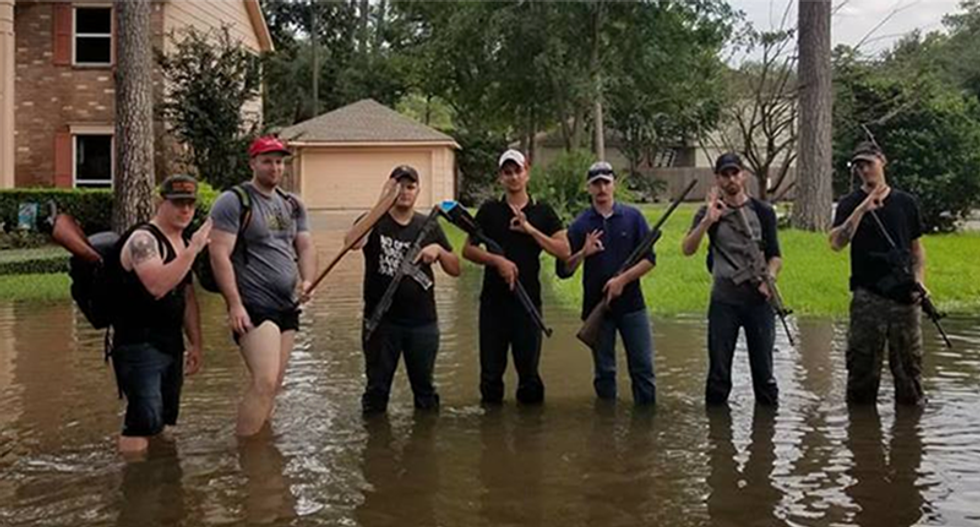 Hundreds of people on the ground in Texas have rushed to Houston and surrounding areas to help with rescues of tens of thousands of people since Sunday. The rains have slowed, the water is no longer rising and calls for help have overwhelmingly decreased.

So, the Oath Keepers are heading to Texas and asking their members to bring boats and specifically they're asking for Oath Keepers who have first aid experience.

"They need our help," their website says as part of a call for help.

Other towns that were hit with rains as the storm moved east are still in need of help, but it is unclear if the militia will be going to other towns.

By the time they arrive in Houston, they're likely to encounter the problem that the vast majority of the rescues have already been done. They'll also encounter the Proud Boys, another far right wing group of armed civilians. The group has been on the ground "patrolling" the city to ensure there is no looting.

"Proud Boys wading through Texas flood with AR15s and shotguns as 'anti looting patrol,' They don't actually look equipped to help anybody," Antifa tweeted out on Thursday.

It's unclear whether either group will be willing to stay in Houston and work to help neighborhoods clean up or if they're bringing clothing, food or supplies to those impacted by Hurricane Harvey. One of the things most needed by survivors who have lost everything is food and clean water. After that, another need will be clothing and then those who will be willing to help them when bills for their homes must still be paid. They'll need help if they didn't have flood insurance, which three-fourths of people didn't have. Survivors will need experts to help them file for FEMA assistance and other things.

The Oath Keepers are listed on the Southern Poverty Law Center's list of extremist antigovernment groups.

Here are some ways that individuals can help donate those hit by the storm.