CNN's Tapper blasts Trump's 'lack of depth' on North Korea: This 'may not be the time to improvise' 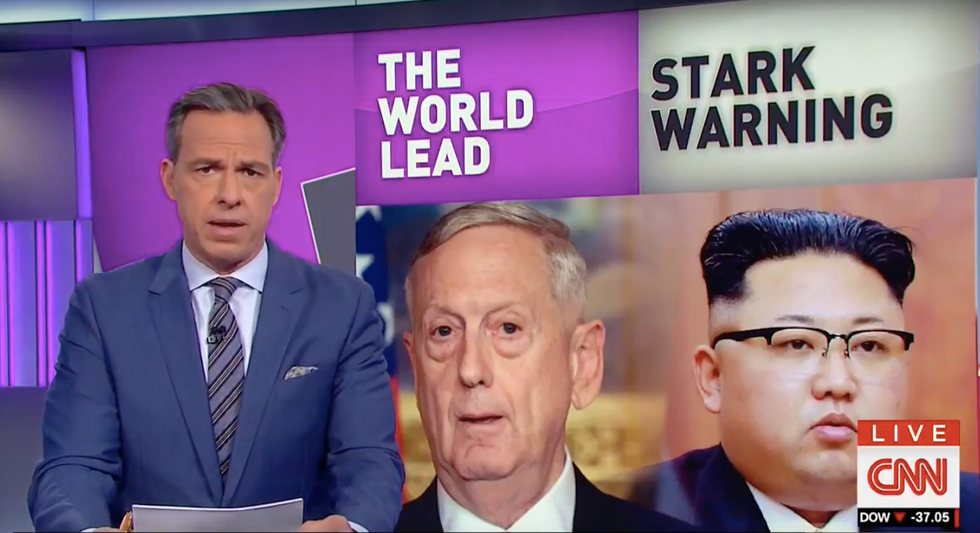 On Wednesday, CNN's Jake Tapper lambasted President Donald Trump for his "loose talk" about the use of nuclear weapons in the escalating conflict with North Korea.

"The rhetoric in the standoff between the United States and North Korea escalated again today," Tapper reported, referring to tweets by Trump and a statement by Secretary of Defense James Mattis warning North Korea of dire consequences if it continues on its present course.

The White House stood by Trump's incendiary remarks on Tuesday in which he promised to respond to North Korean aggression with "fire and fury the likes of which the world has never seen."

Trump's statement about "fire and fury," Tapper said, "fits the pattern of Pres. Trump speaking more loosely -- and in the eyes of critics, recklessly -- about the most devastating weapon known to man."

Calling Trump's remarks a "staggering break" from traditional U.S posture on nuclear weapons, Tapper said the bellicose stance Trump has taken shows "a clear lack of policy depth on this issue, one in inverse proportion to the force with which Mr. Trump expresses his views on nuclear weapons."