'His daughter converted': Fox host loses it at people calling Trump anti-semitic because 'it's so without fact' 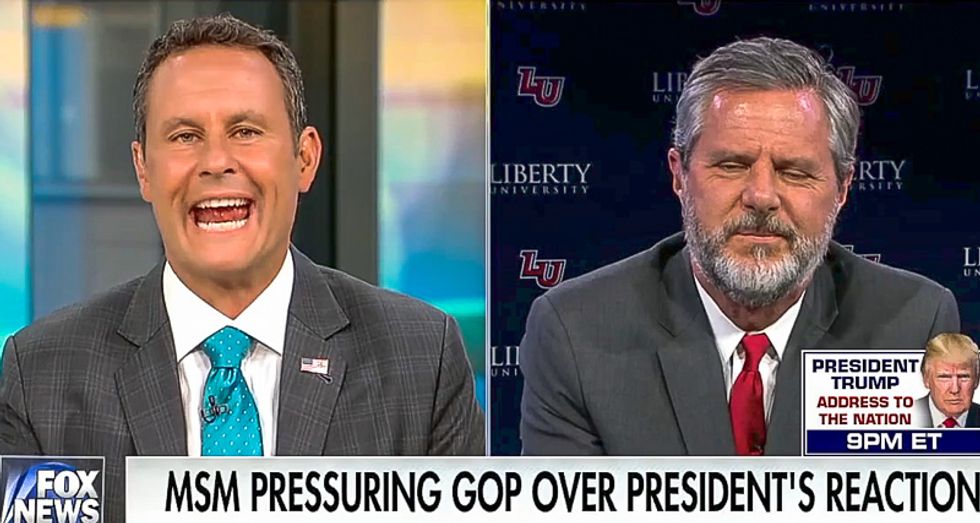 Jerry Falwell Jr. on Monday walked back remarks defending President Donald Trump's assertion that "good" and "fine" people were marching with neo-Nazis and other racists during a recent pro-Confederate march in Charlottesville, Virginia.

During an interview on Sunday, Falwell defended Trump's assertion, arguing that the president had access to secret intelligence that showed "fine people" at the march alongside hate groups.

"I think he saw videos of who was there," Falwell said on Sunday. "I think he was talking about what he had seen, information that he had that I don’t have.”

On Monday, Falwell attempted to explain his remarks while speaking to Fox News host Brian Kilmeade.

"He made it clear there was no moral equivalency between the two," Falwell insisted. "I think he should be commended for that. We had a president not too long ago that refused to call radical Islamic terrorists by name. I'm glad we finally have a leader who calls evil what it is."

"President Donald Trump does not have a racist bone in his body," he added. "He has an abrasive way of saying things sometimes. And the fact that he said there were some good people marching with the bad people, you know, that may have been true. I didn't see the videos. But those good people should have looked around and seen those people with Confederate flags and they should have left."

Before the segment concluded, Kilmeade became animated as his defended the president against accusations of anti-semitism.

"The accusation that he actually supports anti-semitic behavior defies logic!" Kilmeade exclaimed. "He has five people that I know of in his office that have worked for him who are Jewish for 30 years! His daughter converted!"

Russians now must travel to Warsaw for US immigrant visas

That development came amid unresolved US-Russian tensions, and tit-for-tat expulsions that earlier led Moscow to limit the number of US diplomatic staff in Russia.

The US visa move, in effect since October 12, prompted a heated rejoinder from Foreign Ministry spokeswoman Maria Zakharova.

A wide-open Republican primary for the retiring Sen. Roy Blount's seat in the U.S. Senate has attracted a melange of conservative characters, but GOP insiders are worried about their chances to win the general election.