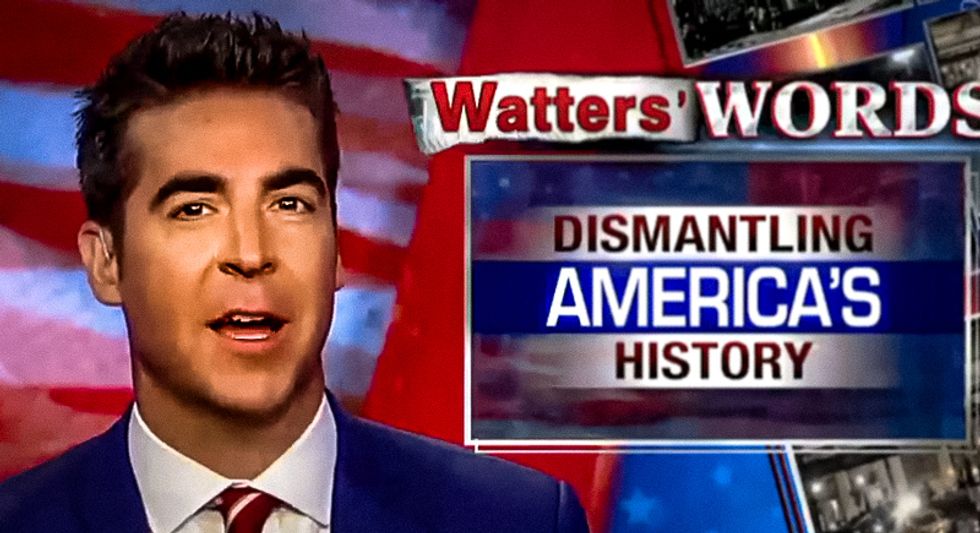 Fox News host Jesse Watters lashed out at Democrats over the weekend for opposing statues of Confederate War "heroes."

In a controversial press conference last week, President Donald Trump defended people who marched with neo-Nazis and white supremacists in Charlottesville, Virginia to protest taking down Confederate War monuments. Trump argued that there were "fine people" at the march who only wanted to protect their Confederate "heritage."

"I wonder, is it George Washington next week?" Trump bellowed at the time. "You really have to ask yourself, where does it stop?"

Watters took the president's side on the issue.

"Watters World personally believes that Confederate War statues are part of our nation's history," Watters opined on his Saturday night show. "And can serve as important relics to reflect upon."

However, the Fox News host admitted that the monuments are "divisive."

"Let's also remember that all of these Confederate War heroes were Democrats," Watters said without explaining the relevancy. "Democrats were the party of slavery. Maybe the left wants to tear down these statues so the country forgets that the Democratic Party enslaved black people."

"But I actually think that those on the left want to destroy any monument of revered historical leaders," he added.

.@jessebwatters: "Let's also remember that all of these Confederate war heroes were Democrats - Democrats were the… https://t.co/uDu1VpjJdz
— Fox News (@Fox News) 1503243750.0