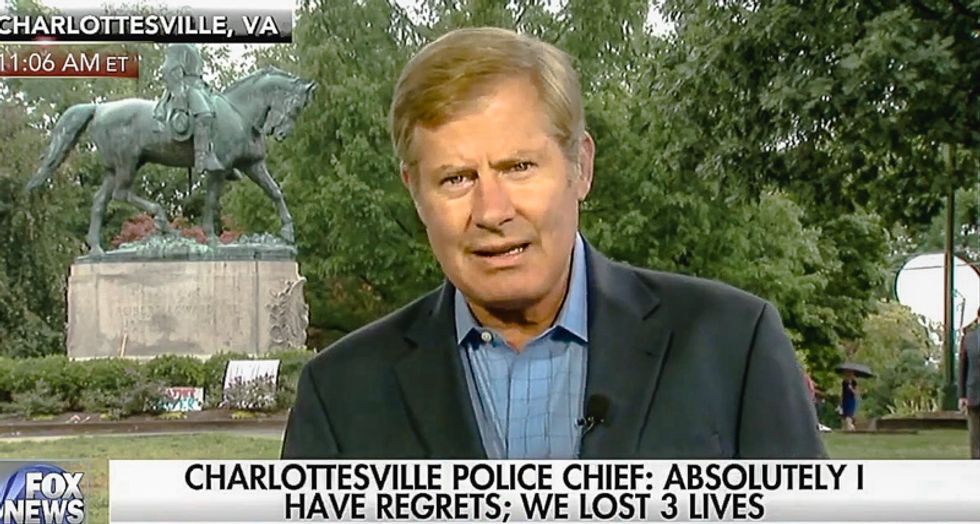 Fox News reporter Doug McKelway on Tuesday described a white nationalist activist who allegedly ran over a group of counter-protesters as a "white vigilante."

During a report from Charlottesville, Virgina, McKelway noted that anti-Confederate activists were destroying Civil War statues in Virginia and other surrounding states after James Alex Fields, Jr. was accused of using his car to kill 32-year-old Heather Heyer.

"The crisis is going to be brewing in other cities," McKelway said. "Those who find the system of slavery to be so abhorrent that we should have no memories of it whatsoever to those who believe that what their great-great-great-great granddaddy did in the Civil War should be remembered and preserved."

"And then, this ventures into the area of airbrushing of history," the Fox News reporter continued. "A tactic of totalitarian governments, a common practice in the former Soviet Union where people who fell into disfavor in the government were literally airbrushed out of history."

McKelway added: "We've also learned when the funeral service will be held for Heather Heyer, the young woman, the 32 year old that was killed by the white vigilante who mowed down people in downtown Charlottesville on Saturday."

Merriam-Webster defines vigilante as "a member of a volunteer committee organized to suppress and punish crime summarily (as when the processes of law are viewed as inadequate."