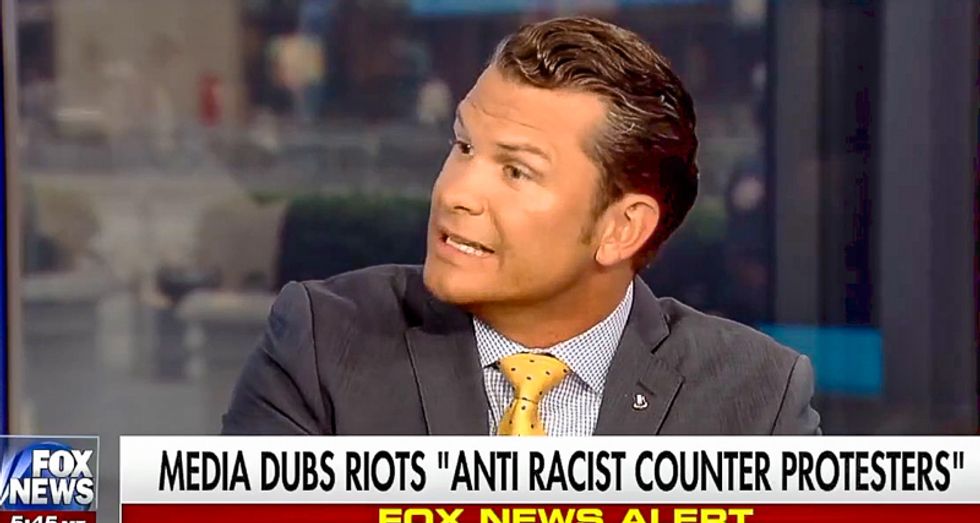 Fox News host Pete Hegseth on Sunday asserted that liberal counter-protesters who showed up in Charlottesville, Virigia over the weekend intended to violate the free speech rights of white supremacists, who claim to be part of the so-called Alt-Right.

A day after two people died during protests in Charlottesville, Fox contributor Carrie Sheffield argued that it was wrong to blame President Donald Trump for inflaming reaction and tensions -- particularly for events during 2016 campaign.

Sheffield said that it was impossible for Trump to be racist or sexist because he had appointed several women and people of color to key positions.

"The left," Hegseth sighed. "You've seen all of this emphasis on multiculturalism at any cost, right? It's racial balkanization."

"They divide us by groups," Hegseith, who is white, complained to Sheffield, who is also white. "And who you are as a race or a class is always secondary to being an American. I feel like that point gets missed. And it certainly gets missed when people are carrying torches, especially when they are making the case that nationalist means we have a country, not a series of people that happen to live together."

"This is what the left does not understand," Sheffield replied. "This is not conservatism. My friends hate it when I call out what Nazism is -- it's national socialism."

"It's collectivism vs. individualism," Hegseth opined. "And when you have anti-fascists calling themselves anti-fascists but they're actually being fascists," Hegseith replied, "in terms of trying to shut down speech, it's emblembatic of the contradictions of the left."