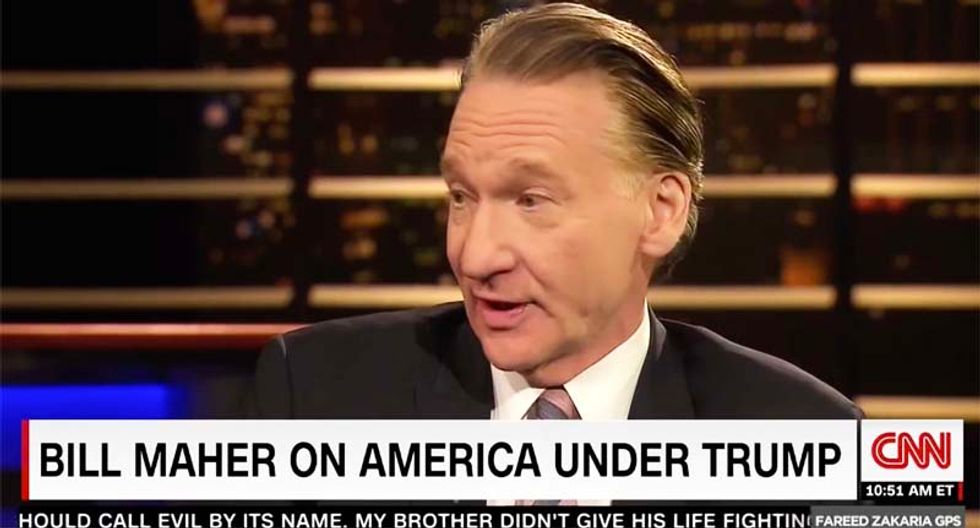 Appearing with CNN host Fareed Zakaria in a two-part pre-recorded interview, HBO "Real Time" host Bill Maher tore into President Donald Trump saying he loves the idea of being a dictator and that it might be impossible to get him to relinquish power.

"I have gone through some very dark moments right before the election, right after it," Maher admitted to the CNN host. "He's besieged now by the Russia investigation and he can't get his legislation through Congress and to forth, but it's only six months in."

"He could survive the whole Russia thing. Usually, you know, when you go after the leader and if you don't get him, he becomes stronger," the HBO host continued. "He totally wants to be a dictator -- it's so obvious. The people he admires in the world -- Putin, even Kim Jong-Un he said is a smart cookie. I asked a panel last week, Ralph Reed, 'do you think Putin had people killed?'? He said 'absolutely.' I said 'do you think Trump would do that if he could?' I do, if trump could do that he would do all the things dictators do."

Maher later turned to getting Trump out of office.

"Right up until the moment he almost lost it, it was all about 'this is rigged, the whole thing is rigged, it's unfair,'" Maher explained mimicking Trump. "Now he's talking about how 'oh, you know, it's just an excuse, this Russian thing, just an excuse.'"

"Once somebody like that gets power, I don't know if you get them to give it up," he warned. "Nor do I trust voting next time. This is an ongoing problem. this isn't something that happened once, -- the meddling in the election -- they're going the do it again."

"Comey said so when he testified before Congress," Maher reminded the CNN host. "He said they're going to come back. This is a crow who is found something to kill and they like that nest and they're not just going to go away quietly until we stop them."

Watch both videos below: