How to safely watch a solar eclipse without damaging your eyes 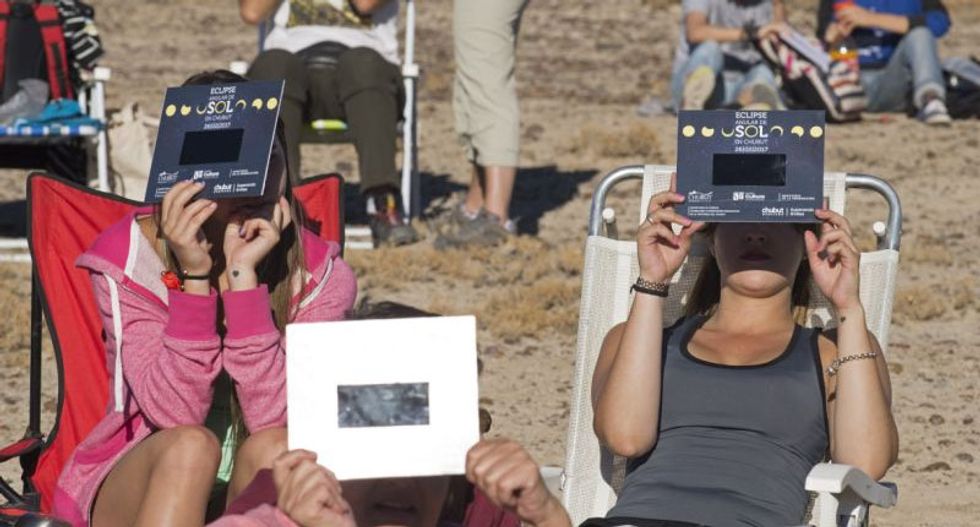 Only eclipse glasses that have a certification with "ISO 12312-2 international standard" are safe for use, according to NASA (AFP Photo/ALEJANDRO PAGNI)

Everyone who plans to look skyward when the solar eclipse sweeps across the United States on Monday should have the proper protective eyewear, or risk lasting blind spots, experts warn.

Regular sunglasses will not do, the US space agency says.

Only eclipse glasses that have a certification with "ISO 12312-2 international standard" are safe for use, according to NASA.

Other options are number 14 welder's glass, or making a pinhole projector that allows a user to project the image of the Sun on paper or cardboard.

But with the Great American Eclipse's shadow set to envelop the entire nation, educating more than 300 million people in its path is a tall order.

Already, the US Fire Administration is warning of scams, such as counterfeit glasses being promoted as suitable for an eclipse when they are not.

And of the handful of US wholesalers that make legitimate eclipse glasses, some sold out well over a week ahead of the event.

"The dangers of looking at the Sun are real and serious," said Vincent Jerome Giovinazzo, director of ophthalmology at Staten Island University Hospital, Northwell Health.

"The damage can really be permanent and right smack in the center of their vision."

Many may recall a childhood experiment of using a magnifying glass to focus sunlight on a leaf or a sheet of paper and set it on fire.

"The same thing can happen to your eyes," said Giovinazzo.

Jules Winokur, an ophthalmologist at Lenox Hill Hospital in New York, has seen the damage in patients who stared at the Sun.

"They get a kind of macular degeneration where they are burning into their retina and they can lose vision and it can be permanent," he told AFP.

"You can be left with a scar from where you were staring at the Sun and that can be right in the center of your vision."

Most people don't want to look at the Sun because it hurt. But during an eclipse, the pain and discomfort are not there.

"It is actually not as uncomfortable to stare at the Sun but the damaging effects are the same," Winokur explained.

"And what you can do is you can burn your macula the same shape of whatever crescent the Sun is showing. You wouldn't necessarily feel uncomfortable."

There is one exception to the rule of not staring directly at an eclipse.

Those in the path of totality, where the Sun is completely blocked by the Moon, can take off their protective eyewear for the short period of time when the sky is completely dark and no circles of sunlight are visible around the Moon.

In the United States, this 70-mile (113-kilometer) wide path of totality will pass briefly through 14 states.

Other options are available for those unable to buy eclipse eyewear.

According to NASA, more than 6,800 libraries across nationwide are distributing safety-certified glasses.

The old-school way of watching via a pinhole projector is also inexpensive and easy to do.

"With this method, sunlight streams through a small hole -? such as a pencil hole in a piece of paper, or even the space between your fingers -? onto a makeshift screen, such as a piece of paper or the ground," NASA said on its website.

"It's important to only watch the screen, not the Sun. Never look at the Sun through the pinhole -- it is not safe."