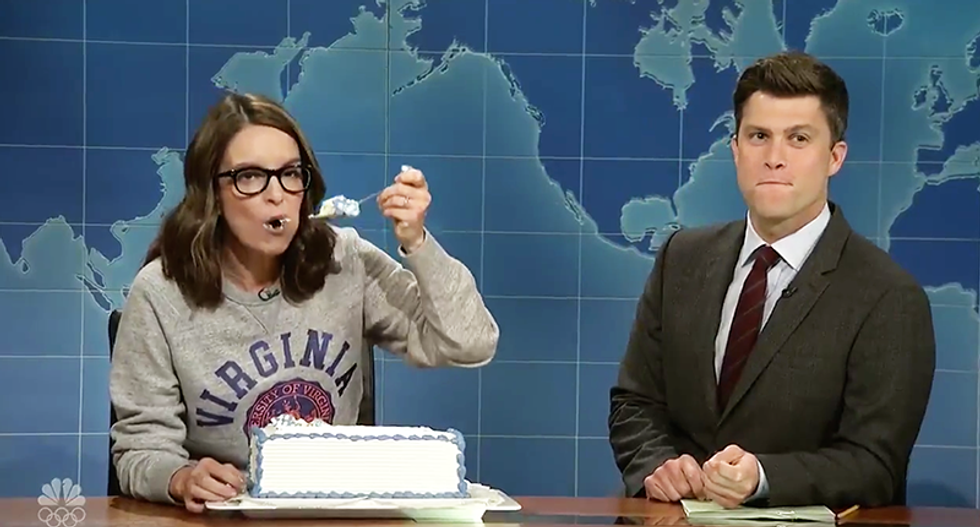 During a surprise appearance on the show, Fey said of her alma mater, “It’s a beautiful school and I have nothing but fond memories of my time there,” despite the fact that she “graduated a virgin.”

“It broke my heart to see these evil forces descend on Charlottesville,” said the writer/producer/actress. Seeing President Donald Trump's response made things even worse. “He condemns violence on many sides and I’m feeling sick ’cause I’ve seen Raiders of the Last Ark and wasn’t confused by it. Nazis are always bad. I don’t care what you say.”

She noted that white supremacists already are plotting protests at monuments and statues scheduled to be taken down.

“Part of me hopes these neo-Nazis do it in New York City. I hope they do try it and get the ham salad kicked out of them by a bunch of drag queens,” she admitted. “At the same time, I don’t want any more good people to get hurt.” And with everyone “anxious” and asking “what can I do?”

She went on to encourage people to “find a local business you support, maybe a Jewish-run bakery or an African-American-run bakery. Order a cake with an American flag on it, and just eat it.”

Host Colin Jost asked how that would help solve anything.

“Love is love, Colin,” Fey shot back. She then started stress-eating cake.

She continued, ranting about recent events such as the white supremacists trying to “take back the country.”

“We stole it from the Native Americans, and when they have a peaceful protest in Standing Rock, we shoot at them with rubber bullets,” she noted. Fey also explained “the other side is Nazis and Klansman,” and "drove the car into the crowd? Hillary’s emails?”

She went on to call out Ann Coulter and House Speaker Paul Ryan (R-WI). Ryan didn't even tag Trump in his denouncement of Trump's words.

“You don’t how to @ somebody on Twitter?!” she asked. “Racism is bad @realDonaldTrump, you p*ssy!”

When it came to Trump refusing to take down Confederate statues, Fey said, “You know he would take them down in a second if he could build a bunch of poorly-contructed condos on the spot.”

In an earlier part of the "Weekend Update," former Weekend Update anchors Jimmy Fallon and Seth Meyers joined the table dressed as George Washington and Thomas Jefferson. Washington defended himself against Trump's comparisons to him and Robert E. Lee.

Watch a clip below:

Take it from Tina Fey and get yourself a sheet cake. #WeekendUpdate pic.twitter.com/dsEm1VYQol

See the Meyers and Fallon video below: