Once again, Donald Trump caters to the white racists who helped elect him 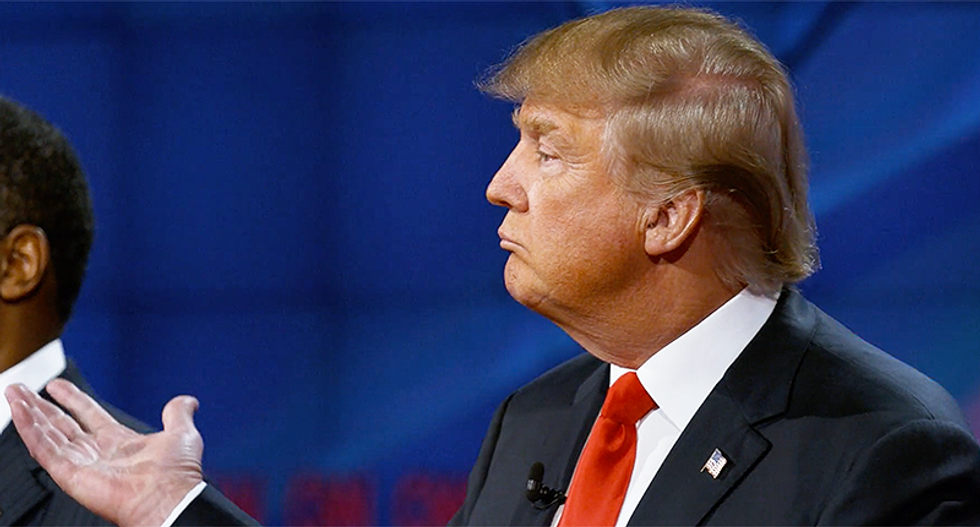 Since Donald Trump has demonstrated that he lacks the moral gravity which necessitates that the President of the United States should be able to condemn hatred and white nationalist terrorism, we must rather turn to our brothers and sisters and provide our own moral guidance and support. It is our solemn duty to embrace one another, look racist hatred straight in the eye, identify it for what it is, and proclaim that it has no place in America. Indeed to assume that he simply lacks moral gravity is to perhaps give Trump too much of the benefit of the doubt. Rather, what seems increasingly likely is that in refusing to specifically condemn a white supremacist murdering peaceful anti-racist protestors on the streets of Charlottesville, Virginia, that he is sending a not-so-veiled message to his numerous supporters on the far-right. One needs to ask, how can Donald Trump condemn a foreign driver, in a foreign city, killing foreigners in an act of foreign terrorism, but when that exact same method of terrorism is employed in an American city we’re treated to a milquetoast, anodyne, reductionist, and most of all inaccurate banality about “many sides?” Just when will the president use the phrase “radical white supremacist terrorism?”

When Trump makes the sickening false equivalence between white supremacists, including members of Neo-Nazi groups and the Ku Klux Klan, with protestors who are there to stand in opposition to racist hate, he is displaying where his true allegiances lay. When he callously says that he is against the “egregious display of hatred, bigotry, and violence on many sides” he is implicitly normalizing fascist violence, and minimizing the death of a young woman who stood in opposition to that fascist violence. Trump, who is so willing to spend so much time talking about so much mere flatulence, apparently became a measured advocate of understanding between what, white supremacists and those whom the white supremacists wish to completely strip of their rights? There are not “many sides” to this issue, not when one woman is dead and the man who did it is charged with her murder. A president should not engage in lame Both-Sidesism or Whataboutism, the fact is that thousands of white supremacists from outside Charlottesville descended on that city with the intent to intimidate, frighten, and threaten, and they did precisely that, and now three people are dead.

Are you awaiting with bated breath for Trump to take to Twitter, or Facebook, or a press conference to say that: “I in no uncertain terms condemn the rise in racist hate speech, and now violence, which my campaign in part unfortunately enabled. I reject the politics of white supremacy, of racist nationalism. In the past, I have sadly not always spoken in a manner that reflected my concerns for all Americans: black, Hispanic, or white; Jewish, Muslim, or Christian; gay, trans, or straight; but I pledge as my solemn duty to contritely go forth working towards the interests of not just white Americans and not just Christian Americans and not just straight Americans, but all Americans.” If you are waiting for that particular speech then you will probably be waiting forever.

Because as the White House has made abundantly clear through both word and action over the past half year, their appearing to not be an administration for all Americans is no mistake. Trump’s remarks were not a gaffe, an accident, a misstatement. His was not impolitic phrasing, or a stumble of the tongue. No, it was very intentional. One must take a man at his word. The White House has been staffed by individuals like Steve Miller, Stephen Bannon, and Sebastian Gorka, all of whom have direct ties to some of the white supremacists who organized the rally and violence in Charlottesville. Trump’s “many sides” statement was no mistake, it was a dog whistle heard loud and clear. At best, it simply doesn’t concern him all that much, and at worst it’s too awful to consider.

So if you’re waiting for any kind of moral leadership from this administration, prepare to wait awhile. In the meantime, it’s our task to find that missing moral leadership where we can, in each other. Perhaps even from those whom we vehemently disagree with on other issues. Senator Ted Cruz, a man with whom I agree on almost nothing politically, tweeted Saturday: “I urge the Department of Justice to immediately investigate and prosecute this grotesque act of domestic terrorism.” I never thought I’d say this, but I agree with Ted Cruz. I hope, pray, and believe that there are many decent men and women on all sides of the political fence who can identify fascist violence for fascist violence, who know that when a car plows into a crowd of peaceful protestors, that there are not “many sides” of that issue to consider. And, if we’re in need of moral guidance, let’s turn not to the White House, but Harlem Renaissance poet Claude McKay’s poem “The White House,” which condemned the racism he faced as a black man in no uncertain terms: “I must keep my heart inviolate/Against the potent poison of your hate.” This is not an issue with “many sides.”

Ed Simon is a senior editor at The Marginalia Review of Books, a channel of The Los Angeles Review of Books. A regular contributor at several different sites, he holds a PhD in English from Lehigh University, and can be followed at his website, or on Twitter @WithEdSimon.