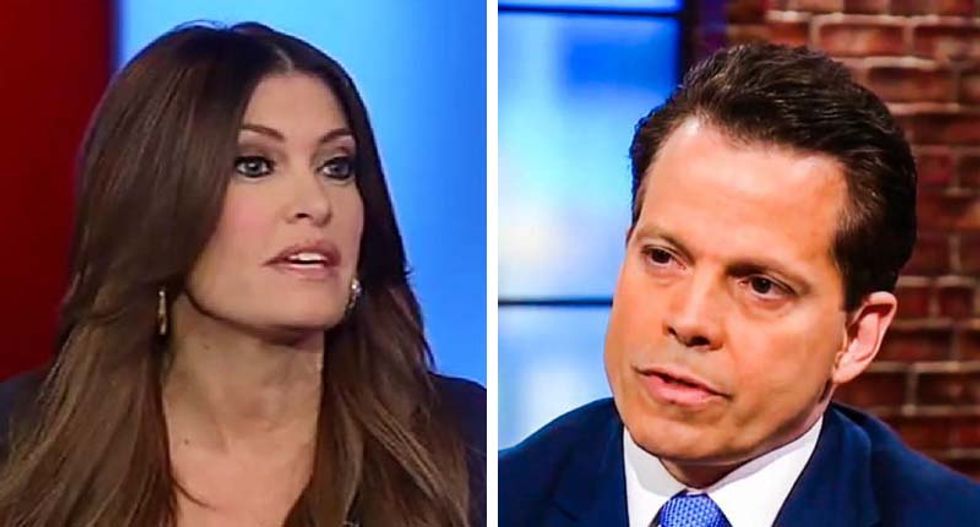 Prior to former White House Communications Director Anthony Scaramucci obscene tirade when speaking with the New Yorker's Ryan Lizza, he was reportedly angered about a tweet saying Fox News host Kimberly Guilfoyle was at a party he attended, causing him to worry about affair rumors.

According to a Huffington Post report on why Scaramucci "lost his cool," the former Wall Streeter attended dinner with the Trumps on the evening before his fateful interview that helped bring about his downfall after only ten days. The report notes that Lizza, as well as Olivia Nuzzi of New York Magazine, tweeted the names of others attending the dinner, including Fox News host Sean Hannity, ex-Fox News co-president Bill Shine and Guilfoyle, co-host of Fox's “The Five.”

The report states that Scaramucci "was upset to see Guilfoyle included in the tweets," while they skipped over other high-profile names like Fox's Ainsley Earhardt and Brian Kilmeade, and White House counselor Kellyanne Conway.

"And since only the truncated guest list had been released, he knew that the inclusion of Guilfoyle would raise suspicions," the report states. "He said he was aware that some associates and members of the media were gossiping about his friendship with the Fox host and feared this particular leak would only make matters worse."

Scaramucci -- whose wife filed for divorce from him on July 6th -- has denied having a relationship with Guilfoyle beyond being "very close friends but nothing more," a friend of the Fox host host explained,  before adding, “He is way too short for Kimberly.”

The next day Scaramucci called the very same Lizza who tweeted some of the names, out of the blue, and went off on now former White House Chief of Staff Reince Priebus as a “paranoid schizophrenic” and claimed that White House chief strategist Steve Bannon "sucked his own c*ck."

Four days later, after General John Kelly took over for the ousted Priebus, Scaramucci was gone.

Guilfoyle said through a Fox News spokesperson that she has known Scaramucci for years and that the two are "good friends."