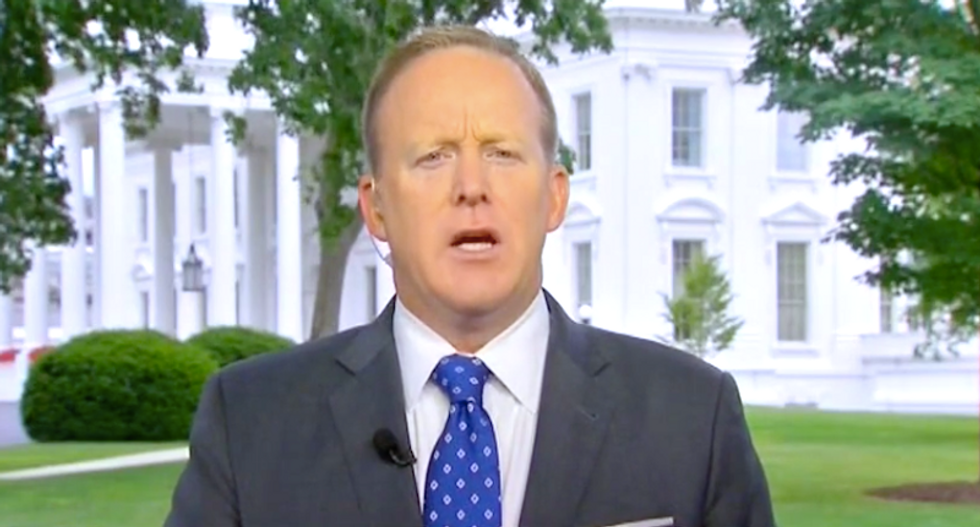 A lawsuit filed Tuesday by former homicide detective Rod Wheeler claims Fox News distorted his findings regarding Seth Rich and alleges that President Donald Trump personally reviewed the report before it was published May 15.

Spicer told NPR, which reported the lawsuit, that he was unaware of any contact involving the president -- but he admits he was briefed.

He admits to meeting April 20 at the White House with wealthy Dallas investor and unpaid Fox financial commentator Ed Butowsky and Wheeler, a former detective and paid commentator since 2005 for the news network.

"Ed's been a longtime supporter of the president and asked to meet to catch up," Spicer told NPR on Monday. "I didn't know who Rod Wheeler was. Once we got into my office, [Butowsky] said, 'I'm sure you recognize Rod Wheeler from Fox News.'"

Spicer, however, denied any knowledge of the report the day after it aired.

The lawsuit quotes a May 14 voice mail Butowsky left for Wheeler, claiming he had the "full attention of the White House on this," but he now insists he was joking.

Fox News eventually retracted the story claiming Seth Rich had leaked emails from the Democratic National Committee, where he worked, to WikiLeaks -- which contradicted intelligence findings that Russian hackers had stolen the data.

The claims were heavily promoted by host Sean Hannity, who said the report "blows the whole Russia collusion narrative completely out of the water."

Jay Wallace, the president of News at Fox News, denied the news outlet published the story to help Trump.

"The accusation that FoxNews.com published Malia Zimmerman’s story to help detract from coverage of the Russia collusion issue is completely erroneous. The retraction of this story is still being investigated internally and we have no evidence that Rod Wheeler was misquoted by Zimmerman. Additionally, FOX News vehemently denies the race discrimination claims in the lawsuit — the dispute between Zimmerman and Rod Wheeler has nothing to do with race," Wallace said in a statement.