Tears and tributes at Virginia memorial for Heather Heyer 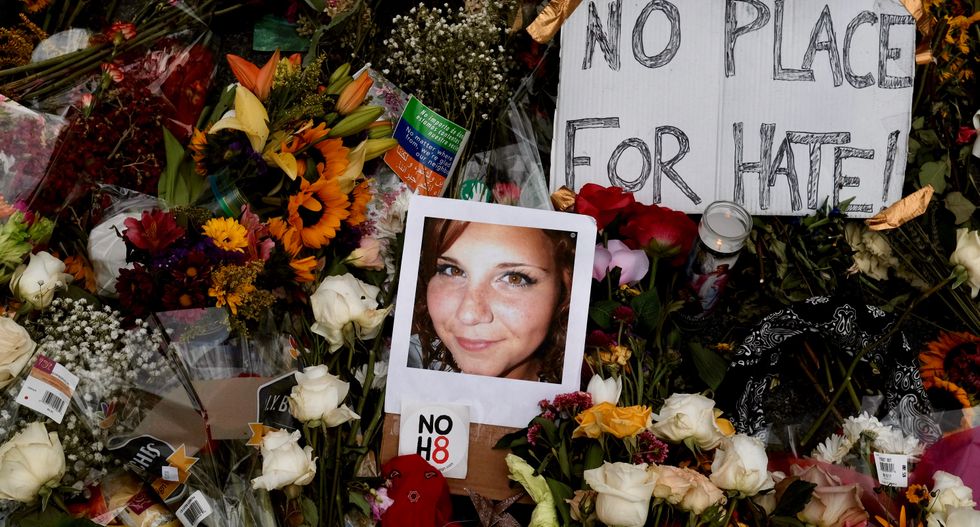 FILE PHOTO: A photograph of Charlottesville victim Heather Heyer is seen amongst flowers left at the scene of the car attack on a group of counter-protesters that took her life during the "Unite the Right" rally as people continue to react to the weekend violence in Charlottesville, Virginia, U.S. August 14, 2017. REUTERS/Justin Ide/File Photo

With tears and tributes, hundreds of purple-clad residents packed an historic Charlottesville theater to remember the 32-year-old woman killed when a suspected white nationalist crashed his car into anti-racist demonstrators.

Heather Heyer, a paralegal whom colleagues said was dedicated to social justice, was killed after clashes on Saturday between white nationalists attending a "Unite the Right" gathering and counter-protesters. James Fields, a 20-year-old Ohio man, has been charged with her murder.

"We are absolutely in awe at this outpouring of affection," Elwood Shrader, Heyer's grandfather, told the service at the city's 1930s era Paramount Theater, near where she died. "She wanted respect for everybody. In our family, all lives matter."

In the crowd were Virginia Governor Terry McAuliffe, U.S. Senator Tim Kane and Charlottesville Mayor Mike Signer. Many of those attending wore purple, Heyer's favorite color, at the request of her family.

The theater's marquee outside read: "Heather Heyer, gone but not forgotten."

"I came here today and I was overwhelmed by the rainbow of colors in this room," said Heyer's father, Mark Heyer, his voice cracking with emotion. "That's how Heather was ... for that, I am truly proud of my daughter."

Fallout from Heyer's death and the street fights among protesters has become President Donald Trump's biggest domestic challenge. Trump was assailed from across the political spectrum over his initial response blaming "many sides" for the violence.

On Monday, the Republican president bowed to political pressure and denounced neo-Nazis and the Ku Klux Klan by name, but on Tuesday he again inflamed tensions by insisting counter-protesters were also to blame.

Alvin Edwards, pastor of the city's Mt. Zion First African Baptist Church, was also due to address the service.At a community meeting on Monday night, he had called on residents to continue to work to make Charlottesville a less appealing place for white supremacists to protest.

"One of the things I want to make sure we do as a community and as a city is that we have to stand up and show the strength that we have in our community," Edwards said.

Residents of the usually quiet, liberal-leaning Virginia city were horrified by the weekend violence they said was brought by outsiders.

Amid concerns trouble could erupt outside Wednesday's memorial, a small group of anti-racist protesters wearing pink helmets and carrying baseball bats and purple shields stood quietly near the theater.

One of the group, who declined to be identified, said they brought weapons to defend themselves in case the white supremacists returned.

"The cops didn't protect us on Saturday and we don't trust them to do so today," the group member said.

Also outside the theater, artist Sam Welty was chalking a large portrait of Heyer on a memorial wall where many tributes to the slain woman have been written.

"The way she lost her life, doing what she did, really stood for Charlottesville. It makes me wish that I knew her," said Welty, 42.

"It's a shame that people who don't live here had to come and unleash hate and violence and put Charlottesville on the world map for something that it does not deserve," he said.

In a tweet on Wednesday morning, Trump described Heyer as "beautiful and incredible ... a truly special young woman. She will be long remembered by all!"