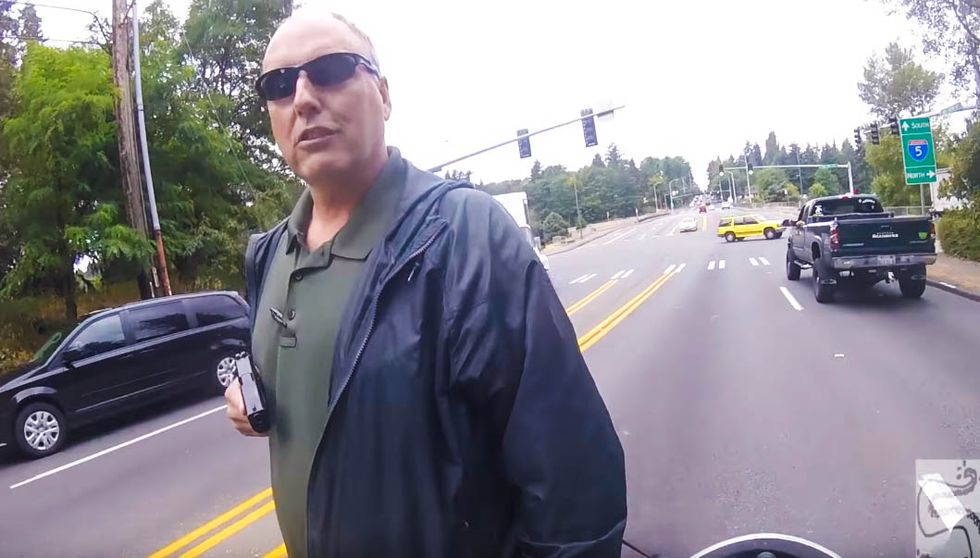 A detective at the King County Sheriff's Department pulls a gun on a motorcyclist during a traffic stop (Screen cap).

A detective at the King County Sheriff's Department in Washington state has been placed on administrative leave after a video showed him immediately pulling a gun on a motorcyclist during a routine traffic stop.

Local news station KING 5 reports that motorcyclist Alex Randall recorded a video of a King County detective pulling him over on August 16.

The video begins with Randall coming to a stop behind several cars that were waiting on a red light. While Randall was waiting, the detective approached him with his gun fully drawn and shouted at him, "How are you doing?"

Randall was alarmed that the detective would just walk up to him holding a gun.

"Oh sh*t, what are you doing to me?" he asks the detective.

"What do you mean what am I doing?" the detective replies. "You're f*cking driving reckless. Give me your driver's license or I'm going to knock you off this bike."

"I will pull over. I'm unarmed," Randall says.

The officer insisted on seeing his Randall's ID. Randall gave him his wallet and explained that he was feeling nervous because the detective was pointing a gun at him.

"That's right, because I'm the police," replied the detective, who then claimed that Randall was driving at 100 miles per hour -- a charge that the motorcyclist vehemently denies.

King County Sheriff John Urquhart wrote on Facebook after seeing the video of the detective that he was "deeply disturbed with the conduct and tactics that were recorded" before announcing that the detective had been placed on administrative leave.