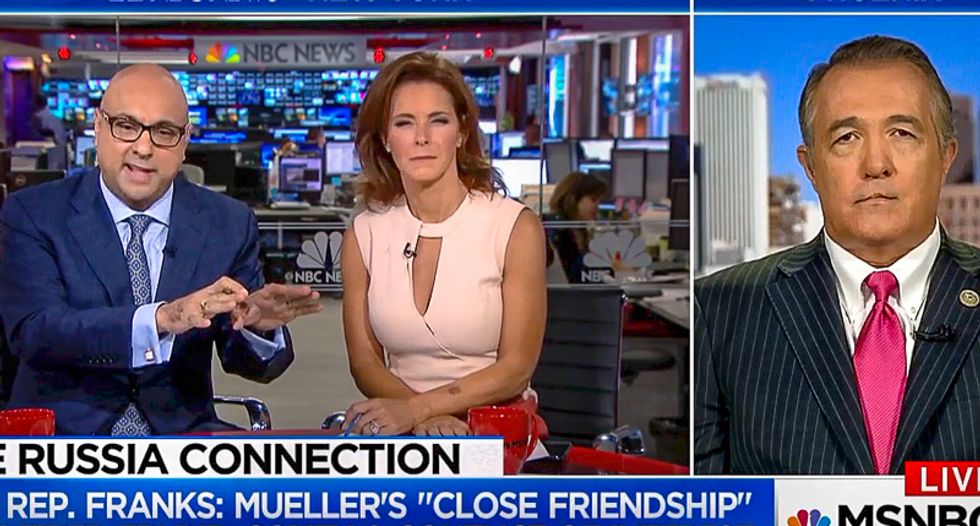 Rep. Trent Franks (R-AZ) argued on Thursday that Special Counsel Robert Mueller should step aside from the Russia investigation, but he also insisted that Attorney General Jeff Sessions should never have recused himself.

During an interview on MSNBC, host Stephanie Ruhle asked Franks to react to the news that the FBI had conducted a raid at the home of Paul Manafort, President Donald Trump's former campaign manager.

"I was against a special counsel in the first place being appointed," Franks insisted. "Because I was convinced, as I said so at the time, that it would go off the rails and certainly it has."

"In terms of recusal, it's not so much me calling for recusal -- even though I do with great conviction -- it's the law itself that calls for recusal," the congressman continued. "It says that anyone who has a relationship with any of the conduct being investigated, the person then has to recuse himself. And the law is very clear on this."

Franks noted that former FBI Director James Comey's admitted that Mueller was a trusted friend. Franks said that "trust" is a conflict of interest because Comey was fired by the president for investigating Russia.

"Even if there is an appearance of conflict," Franks replied. "I don't even think MSNBC would contest that. There's at least an appearance."

"Should [Attorney General] Jeff Sessions have recused himself?" Ruhle pressed.

"I think he probably made a mistake," Franks opined. "I have a great deal of respect for Jeff Sessions. But the effect of that recusal was then to put the president in the direct line of fire."

"That's the logic," Franks confirmed. "Yes, sir. I want to make it clear that I think what Jeff Sessions he did, he did so in an abundance of decency. He was trying to go beyond the call of duty. I think oftentimes people like himself are subject to kind of being victims of their own decency."

"But Robert Mueller's not like that in your mind?" Velshi wondered.

"The effect of that was to leave Donald Trump open to partisanship."

"That's very difficult, Congressman," Velshi remarked. "That's just very hard to understand. I don't understand why Jeff Sesssions shouldn't have but Robert Mueller should have. That doesn't make any sense!"