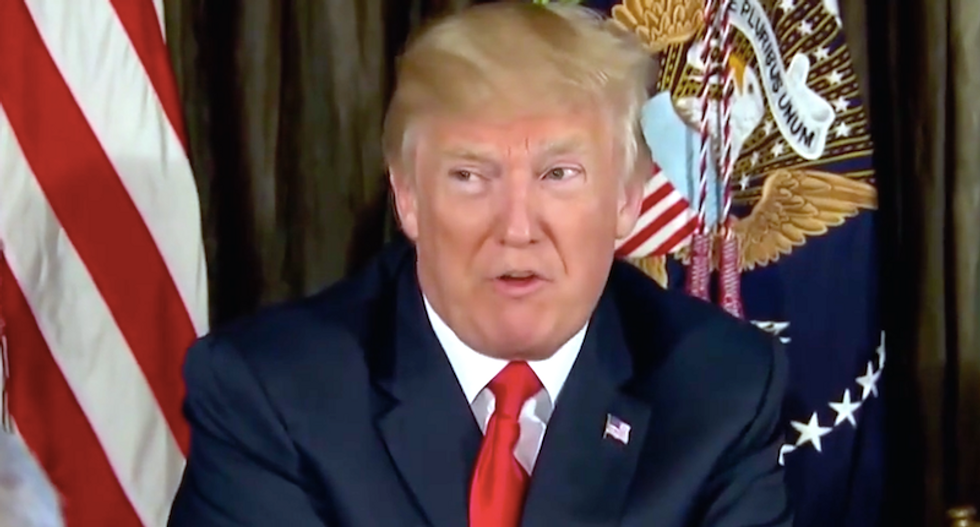 President Donald Trump is claiming he dissolved two councils of CEOs after multiple CEOs resigned from one panel and the other chose to disband altogether.

After the resignations of three executives from President Donald Trump's American Manufacturing Council, Axios.com was contacted by executives from the President's Strategic and Policy Forum, who said they had decided to disband.

"CEOs on President Trump's top outside business-advisory group decided Wednesday to disband amid the tumult over his response to this weekend's white-nationalist violence in Charlottesville, top business sources tell Axios," said Allen on Wednesday.

Moments after Axios made the announcement that the Strategy and Policy Forum is disbanding, President Trump tweeted that he was ending both groups, apparently trying to take credit for the executives' decision.

Rather than putting pressure on the businesspeople of the Manufacturing Council & Strategy & Policy Forum, I am ending both. Thank you all!
— Donald J. Trump (@Donald J. Trump)1502903667.0

However, an executive from the group told Axios, "Debate over the forum has become a distraction and the group has decided to disband."

The decision was made quickly by board members, the source said, "Given the comments of the last several days, no one could continue to be seen as supporting this kind of divisiveness."

"The thinking was it was important to do as a group," one member told CNBC. "As a panel, not as individuals because it would have more significant impact. It makes a central point that it's not going to go forward. It's done."

Trump's unwillingness to condemn the neo-Nazis and Klan members who rioted in Virginia has sent shock waves through the government and through the corporate world which understands that the president has crossed a line with the public.

"Trump's 'both sides' response to the violence has made CEOs even more wary of interacting with the White House, with many of them facing pressure from employees and shareholders to distance themselves. The loss of support from business could further undermine Trump's already-faltering legislative agenda," said Allen.

Earlier this week, Merck Pharmaceuticals CEO Kenneth Frazier resigned from the American Manufacturing Council in protest of Trump's tepid condemnation of the hate groups that converged on Charlottesville leaving one person dead and at least 20 others injured.