WATCH: California man calls police after being robbed – and cop ends up punching him in the face 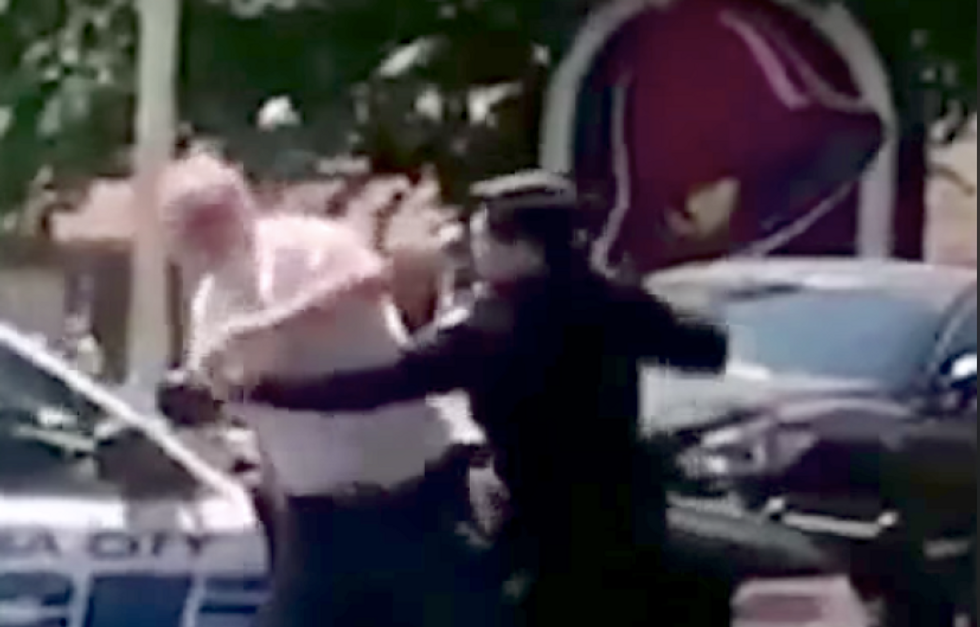 A Yuba City, CA woman is speaking out after a police officer was caught on video punching her husband, who was cooperating with police after calling them to report a robbery.

According to KCRA Channel 3, Ronald Ybarra, 59, was taken into custody on Monday afternoon at a Taco Bell in Yuba City. He was charged with resisting arrest and parole violations and is being held without bail.

In video taken at the scene, however, an officer can be seen punching Ybarra twice in the face as Ybarra stands with his hands behind his back against a patrol car. The officer then forces Ybarra's arms behind his back and drives him to the ground.

Yuba City Police Lt. Jim Runyen said that officers responded to the scene after witnesses reported a disturbance and that Ybarra was one of the men involved with a fight that broke out at the restaurant.

Someone in the 10-second video captured at the scene can be heard saying, "He's got his gun," but Ybarra's wife Kathi told Channel 3 that her husband wasn't armed and doesn't even own a gun.

The video of the officer punching her husband, Kathi Ybarra said, "made me sick to my stomach. It just upset me. It clearly looked like he was the one assaulted -- not the other way around."

Kathi Ybarra said that her husband had confronted a man at the restaurant who had stolen money from him.

"He confronted him and called the police department to come because the guy had cashed his check for $5,000," she said.

Ybarra and the other man got into a scuffle as Ybarra tried to detain him until police arrived, Kathi Ybarra said.

Witnesses, however, claim that Ronald Ybarra was aggressive with the police officer and in fact tried to hit the officer first.

The department says they are reviewing the incident.

"I would imagine he's going to try to file a law suit against the county. It's time the city, someone needs to hold them accountable," Kathi Ybarra said. "This was just too much. He didn't lose his life, but he very well could have."