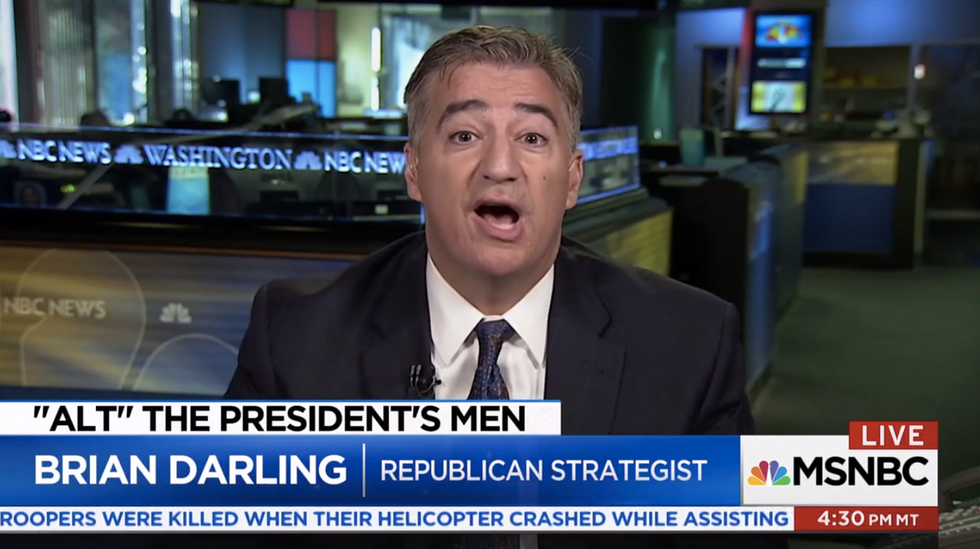 A discussion of President Donald Trump's ties to the so-called "alt-right" went off the rails on Sunday when former Gov. Howard Dean (D-VT) asked what the functioning difference is between "virulent anti-Semite" Steve Bannon and an armband-wearing Nazi.

Dean pointed out that Bannon "actually is under -- under sworn oath of his wife -- has refused to let his children go to Jews. He's a virulent anti-Semite and -- as Joy [Reid] pointed out earlier in the clip, has been recognized as somebody who is a major figure in the alt-right. What's the difference between that and being a Nazi? I don't know."

"These three guys don't belong in the White House," he said.

Republican pundit Brian Darling said it's "outrageous" that MSNBC is giving a platform "to people calling Steve Bannon a Nazi. I know Steve Bannon, I have actually written three op-eds this year for Breitbart.com. Breitbart is a conservative website."

This was when things got heated.

"It's a racist platform and you know it," said former Bush ethics chief Richard Painter.

"Am I a racist for writing for it?" Darling said. "Breitbart.com is read by 35 million people a month. Are they racist?"