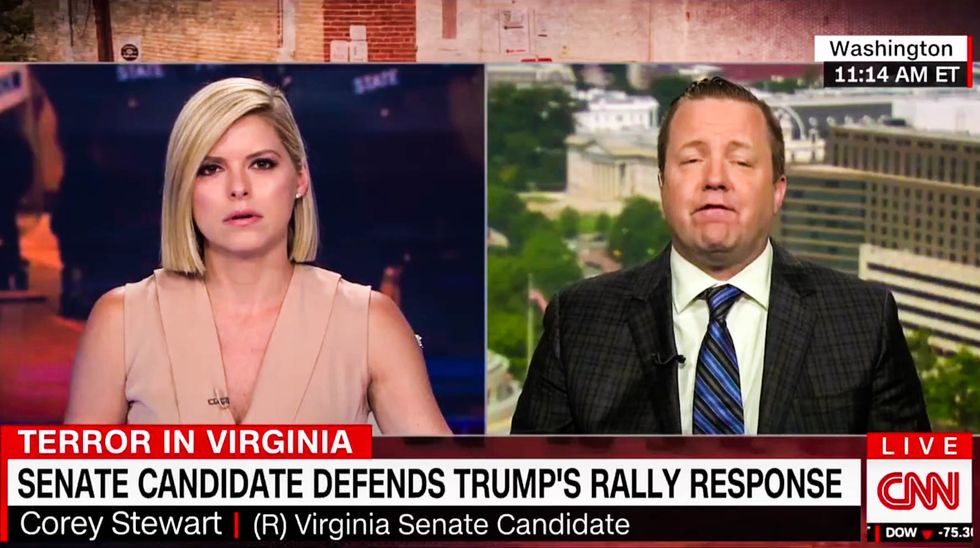 Corey Stewart -- the Minnesota-born, Confederacy-loving Republican who plans to run against Sen. Tim Kaine (D-VA) in next year's Virginia Senate race -- found himself cornered during an interview with CNN's Kate Bolduan on Thursday.

During a discussion on last week's white nationalist rally in Charlottesville, Stewart tried to insist that there really were good people at the rally whose top concern was protesting the removal of Confederate monuments in the city.

However, Bolduan pointed out that Jason Kessler, the person who organized last week's rally, believed that there was a concerted conspiracy to eradicate white people from the United States.

What's more, Bolduan noted that Stewart himself had appeared at a rally with Kessler just five months ago in Charlottesville.

"I'm confused when I see images of you showing up as recently as, i think it was February... showing up at events with Jason Kessler, a white nationalist," she said. "The most recent interview he did, promoting the rally, he said. 'I am pro-white. I want to stand up for my people. Right now, there is an ethnic cleansing against white people in the United States."

"Well, look, he's got to speak for himself," Stewart responded.

"Well, you can also speak for yourself by showing up to events with him," Bolduan replied.

"He's got to speak for himself," Stewart insisted. "I didn't know he had those views."

The event that Stewart attended with Kessler was an anti-immigration event where speakers argued in favor of letting immigrants come in from majority-white Western countries, but not from places such as the Middle East.