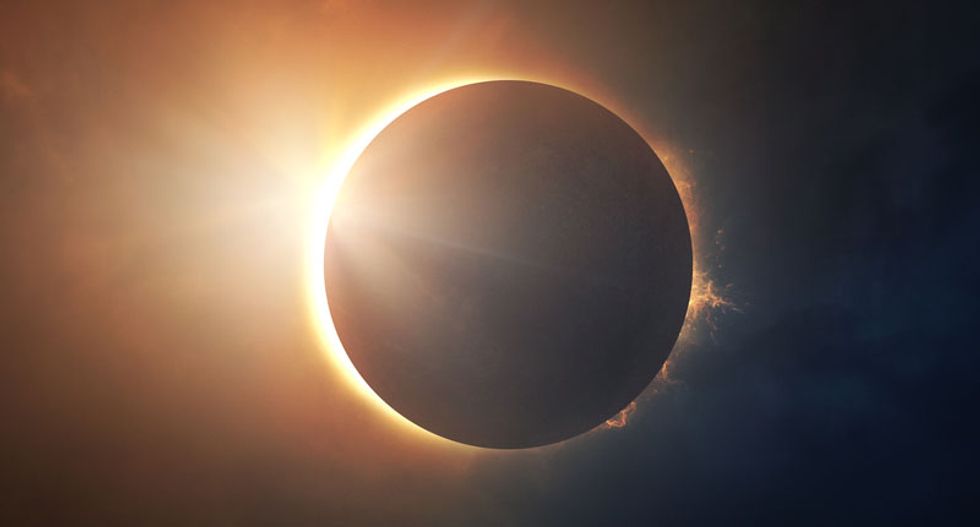 The moon covers the sun in a beautiful solar eclipse. (Shutterstock)

On Monday, when a total solar eclipse sweeps across the United States for the first time in 99 years, people gathering in Charleston, South Carolina, will be the last on the continent to experience it.

For those interested in seeing the eclipse from afar, or from places that may be clouded out, the US space agency NASA is planning a live broadcast on August 21:

Historic Charleston, with its cobblestone streets and elegant antebellum mansions, was a-bustle on Sunday in full pre-eclipse mode.

Its restaurants were packed and downtown parking was at a premium as excited locals and tourists strolled cheerfully along the seafront Battery promenade.

"It has been crazy since Friday night," said bar owner Chaz Wendell.

"This is probably going to be our busiest weekend all year."

Weather predictions for Monday were iffy -- with clouds and scattered thunderstorms predicted through the hours when the eclipse is due, from the moment when the moon first obscures a small arc of the sun, to totality, and through the end of the whole cosmic viewing experience.

For locals, and for those who have come from far away, it is a big deal.

"We're very excited," said Brandy Mullins, a 38-year-old stay-at-home mother who moved to Charleston six weeks ago with her family.

She and her three children all have solar glasses and are planning to watch the eclipse from an open area -- weather permitting.

"It's not looking very good," she said of the weather forecasts, "but it's OK -- we still get to experience it and see the darkness."

Nick Willder, 59, and his wife, Sarah Boylan, 60, of Nottingham, England had planned their two-week vacation through the southern US to end in Charleston in time for the eclipse.

It will be their third try to see a total eclipse: earlier attempts in England and China, Willder said, were both rained out.

The "Great American Eclipse," as it is being called, will move diagonally across the country, northwest to southeast, providing a spectacular solar show -- again, weather permitting -- and an excellent excuse for scores of eclipse-viewing parties and music festivals.

It will first be visible in the northwestern state of Oregon at 9:05 am (1605 GMT), with totality there coming 75 minutes later. Oregon authorities say they expect a million people to flood into the state for the event, clogging roadways and overflowing campgrounds, the Oregonian newspaper reported.

"This is the trip of a lifetime," said Deirdre Duignan, visiting Oregon from Dublin, Ireland.

"It will be one of those moments that will just take your breath away."

In all, about 12 million people living in 14 states will be in the path of totality, with many millions of others able to witness at least a partial eclipse, according to the American Astronomical Society.

Some street vendors sold T-shirts and buttons to mark the eclipse.

Jan Dahouas, a vendor from Atlanta, Georgia, sold eclipse-themed shirts he designed for $20 each, and buttons that read, "Keep Calm and Stare at the Sun."

Some restaurants advertised sales of the prized solar glasses that make eclipse-viewing safe.

Experts have cautioned people not to look directly at the eclipse or risk causing permanent blind spots in their vision.

"You put them on and you can't really see anything," explained Zoe Spyridonos, age six, showing off the cardboard solar eclipse glasses her parents bought her.

"So you just look at the sun and then it is not really bright."

In Charleston, some local government offices are closing to allow workers to avoid driving during the eclipse, and police and emergency services are putting extra personnel on duty to deal with crowds, the Post and Courier newspaper reported.

As many as two million visitors were expected in the state for the eclipse.

The small town of McClellanville, directly under the path of the eclipse, is even renting extra port-a-potties.

And what if -- after all the hub-bub and extensive preparations -- bad weather should bring disappointment to would-be eclipse viewers?

"If we don't get to see an eclipse it doesn't really matter," he said.

"It's just like putting a pin in a map" -- a great excuse to travel.