WATCH: Tennessee deputies tortured 19-year-old inmate with Tasers while he was strapped to a chair 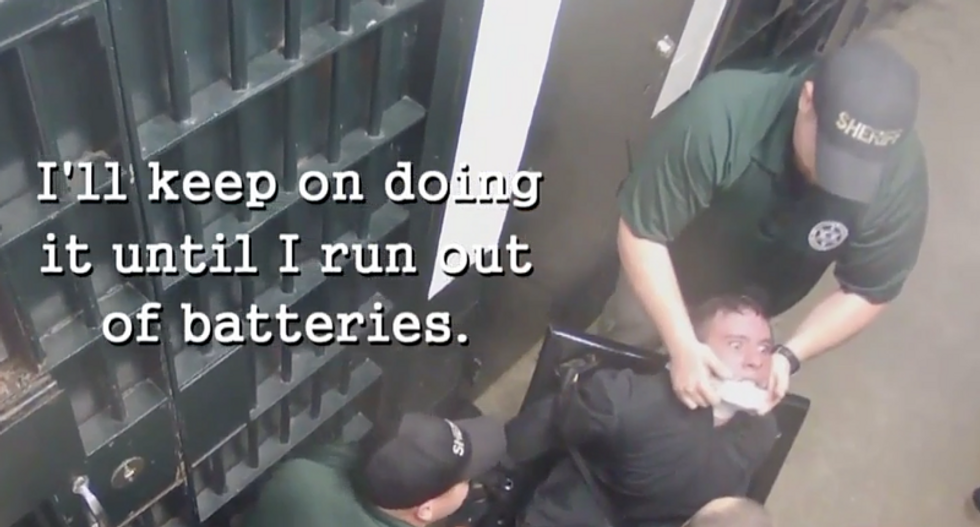 "Jordan Elias Norris, 19, has filed a lawsuit in the U.S. District Court accusing the deputies of deprivation of civil rights, citing the use of excessive force and failure to protect after he was repeatedly stunned with Tasers in the jail in November 2016," The Tennessean reports. "He suffered more than 40 pairs of Taser burns, many of which are unaccounted for by authorities, the lawsuit states."

The incidents – while the victim was bound in a restraint chair – were documented by jail surveillance video and by video cameras on the Tasers. Pictures after Norris was released show extensive burn scaring across his body.

"I'll keep doing that until I run out of batteries," one deputy is heard saying.

"As Sheriff, I want our citizens to know that any inappropriate behavior that may have violated an individual's rights will not be tolerated," Sheriff Breedlove wrote in a statement. "I have placed the employees involved on administrative leave while the investigation is conducted."

Norris was being held on marijuana and weapons charges and was publicly taunted by Sheriff Breedlove upon being arrested. Tennessee is not among the eight states that have legalized the plant.

"On the sheriff office's Facebook page from the week Norris was arrested -- the sheriff himself seemed to taunt Norris. He wrote that Norris 'peed a little bit' when he was first arrested by the SWAT Team," News Channel 5 reported. "The sheriff called Norris 'a drug dealer by trade and on the fast track to live the thug Life.'"

"I said, 'Jordan what is that?' It looked like he had the measles. And he said, 'That's where they tased me.' I could not wrap my head around that," Chapman said.

"It's terrible," the victim said, his eyes watering as he recalled the ordeal.

[WARNING] This video is disturbing: