'We're trapped in an endless loop of The Apprentice': Maher panel would rather 'be fired' than stick with Trump 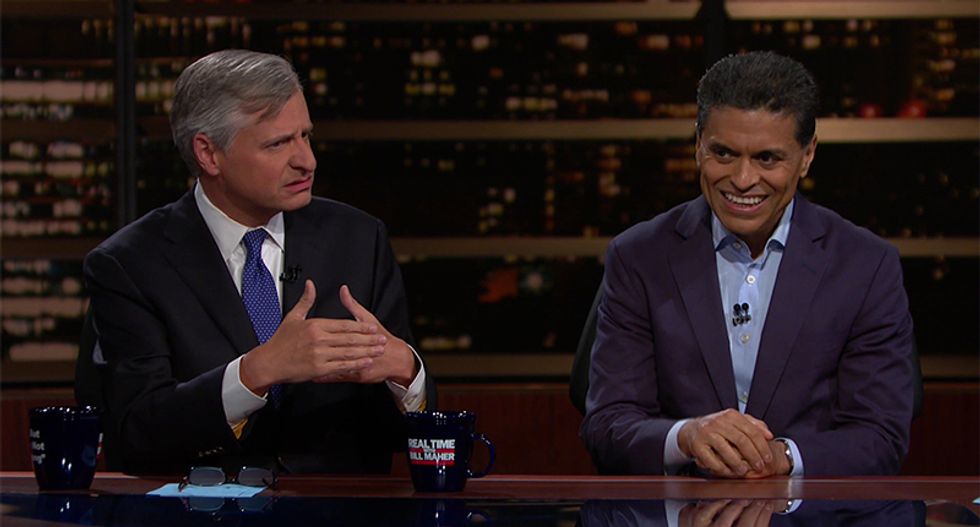 CNN's foreign policy expert and host Fareed Zakaria didn't pull any punches on Friday's "Real Time" with Bill Maher. Given the increasing foreign policy problems in Russia, North Korea and now Venezuela, he had a lot to say. However, his largest fear was that President Donald Trump would decide to drop a nuclear bomb on a country simply to prove a CNN reporter wrong.

He explained that Trump is being so "bellicose" that he's almost pushing North Korea to act against the United States.

However, "if Trump saying what he's saying gets the North Koreans to actually de-nuclearize, I would give him the Nobel Prize," Zakaria confessed.

Former Newsweek editor Jon Meacham noted that Kim Jong-un seems to want to be a part of the exclusive club of countries with nuclear weapons. When one of those leaders of nuclear nations baits North Korea it makes things more dangerous. He feared what North Korea was becoming.

Meacham noted that he fears Trump thought that he was being Winston Churchill with the saber-rattling and threats.

"He thought he was being Jean-Claude Van Damme," Maher cut in.

"With Trump it's about entertainment. We're all trapped in an endless loop of The Apprentice," Mechem said. "And I want to be fired."

"Or you really want to fire him," Zakaria said.

The group also mocked Trump for only taking his intelligence briefing once each day while receiving two folders that contain positive news about him. The folders also include flattering photos.

"It's like something out of the 'Lion King,'" Zakaria joked.

Maher brought up a headline from Fox News that appeared this week, which argued things aren't really that bad if Trump colluded with Russia in order to win the presidency. He explained that the denials from the White House have followed a path from denying any of it happened, to admitting it happened but there were no meetings. It was then followed by an acknowledgement that there were meetings but that there was no collusion. Once evidence was found of possible collusion they claimed it wasn't a crime. Now they're speculating whether committing a crime is really all that bad after all.

"Is it such a crime to commit a crime?" Maher wondered. He said that it feels like a "slow-moving coup."

'We're trapped in an endless loop of The... by sarahburris