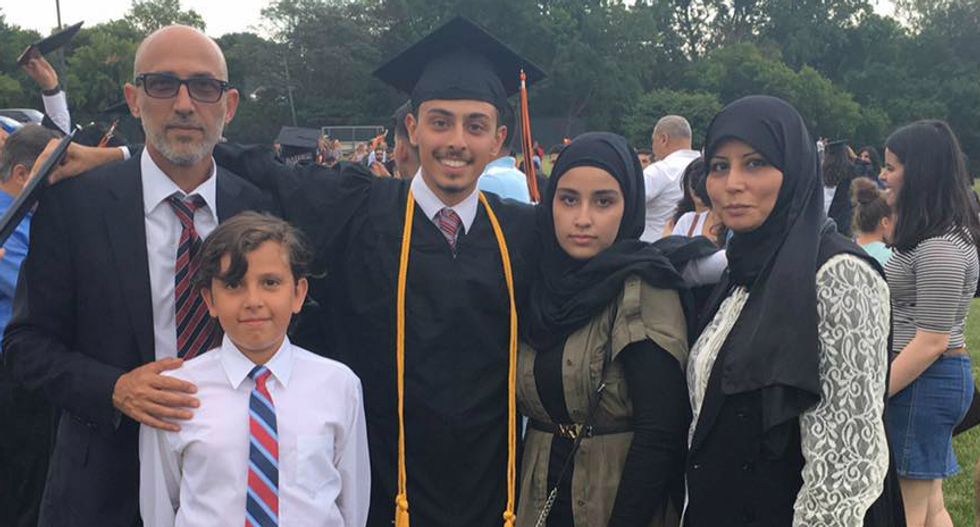 Sattar Ali (left) and his family. Image via Ali's Facebook.

In Kansas, an Iraqi-American doctoral student was arrested along with his family after attemping to deposit a large check from the sale of their old house.

According to Wichita State's student newspaper The Sunflower, Sattar Ali, who moved to the United States in 1993, took a check for $151,000 from the sale of his family's old house in Michigan to Wichita's Emprise Bank. As he told local news station KAKE, he brought verification documents along with him, but a few minutes after he first presented tellers with the check, he was in handcuffs.

After being taken outside, Ali discovered his wife Hadil and their 15-year-old daughter Hawra were in the backseat of the police car waiting for him. Sometime during their three-hour detainment, Ali said police called his 11-year-old son's school to tell them to hold him because his parents had been arrested.

He said he didn't discover until after they were released that he and his family had been arrested because the bank claimed they could not verify the large check and believed it was fraudulent.

“No one told me why I was being arrested until we were being released,” Ali told The Sunflower. “They didn’t read me rights or anything.”

“We were devastated. Terrified. Crying the whole time,” Ali said. “We had no idea what the arrest was for.”

Ali told The Sunflower he believes he and his family were racially profiled because the large check came from someone with his name and not someone named "James or Robert."

“Let’s assume I made a mistake and gave them a bad check,” Ali said. “Why would they arrest my wife and daughter?”

Ali, who along with his wife and children are American citizens, lived in Wichita from 1998 to 2008, and was returning to get his doctorate in engineering from Wichita State, where his eldest son is a freshman. He said the arrest marked his first time feeling unwelcome in the Kansas city.